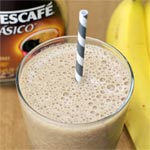 (2 servings)    Printable Version
I didn't have coffee flavored yogurt, so I stirred about 3/4 teaspoon of granulated instant coffee crystals into the milk and used vanilla yogurt instead. The smoothie needed a little more sweetness, but that was easy to remedy. I just added a little bit of honey and kept blending. If you do use instant coffee, be advised that a little goes a long way. If you use too much, you get a little bitterness. Start with just a pinch and then add more if needed once everything is blended. (This recipe was submitted in 2002. It was tested and photographed in February 2014.) 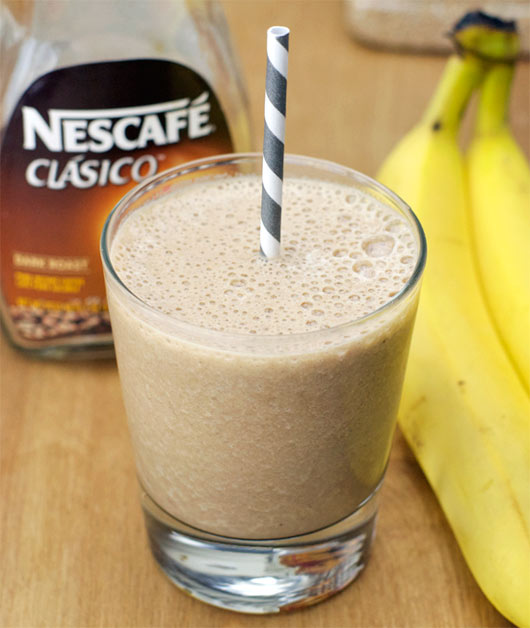 How To Make A Banana Coffee Smoothie

Combine frozen bananas, milk, yogurt, cinnamon, and nutmeg in a blender container. Cover and blend till smooth. To serve, pour into glasses. Garnish with fresh banana slices and mint if desired.

I once tried this with plain yogurt and a teaspoon of instant coffee. It worked!


Comments About This Recipe
What do you think of Banana Coffee Smoothie?
Overall Average Rating = 4 (out of 5)
Based on 3 votes.

From D. Booth
I haven't seen coffee-flavored yogurt in any of my stores so I tried your instant coffee idea but with vanilla yogurt. It was really good. Not the best smoothie I've ever had, but definitely tasty.

From zupajuiceplus.c
Splenda is just as bad as nutra sweet. Go for stevia! It is a natural sugar substitute and actually has health BENEFITS... unusual for a substitute. Cane juice is a good choice too if you are not a diabetic. Look for raw sugar products...this sort of thing is only needed if you like or would like to improve the quality of your life...

From calorie crusher
For the calorie conscious, or anyone who typically has coffee in the morning - chill fresh brewed coffee in the fridge or more quickly with a handful of ice cubes, poor it in a blender with the frozen bananas, skim milk, ice, unsweetened coco powder, splenda, and cinnamon!