The Malt-O-Meal Company dates back to 1919 when John S. Campbell developed a hot wheat breakfast cereal he called Malt-O-Meal. The company officially adopted the name The Malt-O-Meal Company in 1953. By 1965, the company had entered the ready-to-eat non-hot breakfast sector with the introduction of Puffed Rice and Puffed Wheat cereals. While the company is best know for it's line of hot cereals, it derives a large percentage of its sales from it's 20-plus discount-priced bagged cold cereals - many of which are imitations of better-known national brands. In 2015, Malt-O-Meal was purchased by cereal giant Post. 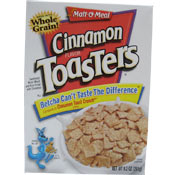 From the front of the box: "Sweetened whole wheat and rice cereal with cinnamon... Read More