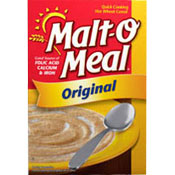 In the years that followed, Malt-O-Meal went on to specialize in value imitation cereals - cereals that tasted remarkably similar to other name brand cereals but which retailed at a significantly lower price.

As of June 2010, Malt-O-Meal hot cereal was still being sold in grocery stores. 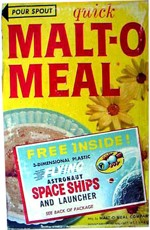 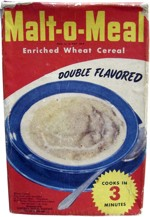 Submitter: ChuckCheese
Uploaded: 6/2/2010
Additional details
Upload an image for this cereal
Comments About This Cereal
What do you think of Malt-O-Meal?

I've been eating this type of hot cereal since I was a kid and continue to do so as an adult. And it's not the same as 'cream of wheat'.

Can't find Malt-0-Meal in my area. What the heck!

I love me some Malt-O-Meal Cereal. So satisfying.

Hard to find in stores these days.

Do they ever offer coupons for this cereal. It's so expensive.

I have been looking for a long time for an image (or to actually acquire) a Malt-O-Meal box from the late 1950s or early 1960s. This box had (as I remembered, from being a small boy at the time,) on the back of the box, a drawing of an owl standing next to a blank, yellow notebook page labeled "to do list"

As I recall, the back of the box was just that... You would fill in the lines on the "To-Do-List" with your days activities. As a boy, I always referred to this cereal as "birdie-cereal" because of that back.

Does anyone have an image of this box, or even better, on that they'd wish to sell?