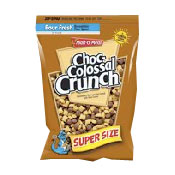 Company Description: The Malt-O-Meal Company dates back to 1919 when John S. Campbell developed a hot wheat breakfast cereal he called Malt-O-Meal. The company officially adopted the name The Malt-O-Meal Company in 1953. By 1965, the company had entered the ready-to-eat non-hot breakfast sector with the introduction of Puffed Rice and Puffed Wheat cereals.... Read on and see all cereals from Malt-O-Meal
This cereal belongs to the following Mr Breakfast Cereal Families:
Upload an image for this cereal
Comments About This Cereal
What do you think of Choc-Colossal Crunch?
There are no comments yet for this cereal. Be the first! Was it good? Was it bad?
Do you have information not included in the article? Let the world know!