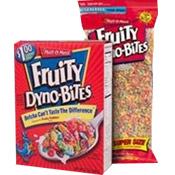 
Bags and boxes of this cereal encouraged consumers to "compare to Fruity Pebbles." Fruity Pebbles was introduced by Post in 1969. This cereal was similar in taste and appearance but was usually sold at a much cheaper price.

Upload an image for this cereal
Comments About This Cereal
What do you think of Fruity Dyno-Bites?

Dyno bites are the best! Get your munch on!

This is just as good as Fruity Pebbles. I can't tell the difference and it is much cheaper.

I love this cereal, maybe a bit too much. I had serious teeth problems in the past and I'm in the process of getting them fixed, but I can't exactly chew very well or eat a wide range of things. One thing I can eat is rice-based cereal like this after about 3 minutes of sitting in milk when it gets soggy, and this is my favorite. Super super good. Even my cat loves this stuff. I have to put the bowl down and leave some milk in it for her to lap up at the end, since whenever I eat these she sits right next to me and stares avidly.

It's good but not quite as good as the original Fruity Pebbles.

This is my boyfriend's and my favorite cereal next to Honey Bunches of Oats. It's not too sugary to send me into diabetic shock, but sugary enough to be good.

I thought it was going to taste funny, being the "off brand", but we were wrong! Now me and my husband LOVE this stuff so much more than Fruity Pebbles. Age: 22 & 23

The cereal is a revelation. Heap 'um high on the wide spoon about two minutes into milk. Try replacing jelly on pb&j with, you guessed it, Fruity Dyno-Bites!

I live in Ontario, and I wish my parents would've purchased more! We purchased some in Michigan, and we didn't think that they would be so good due to their low price. Best cereal I've had in a long time.

Amazing! I live in Canada so I don't get it often but when I do get them... amazing!