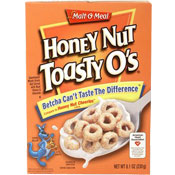 
This cereal was Malt-O-Meal's bargain priced version of General Mills' Honey Nut Cheerios. Packages of the cereal went so far as to urge consumer to compare the two cereals, boasting, "Betcha can't taste the difference." The name of cereal was later changed to Honey Nut Scooters and with that an even bolder claim was made: "Kids prefer the sweet taste of Scooters to Cheerios."

Upload an image for this cereal
Comments About This Cereal
What do you think of Honey Nut Toasty O's?
There are no comments yet for this cereal. Be the first! Was it good? Was it bad?
Do you have information not included in the article? Let the world know!