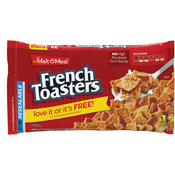 
This is a new addition to Malt-O-Meal's line of Toasters cereals which includes Honey Graham Toasters and Cinnamon Toasters. It's a bargain priced alternative to General Mills' French Toast Crunch.

Malt-O-Meal's website described the cereal like this: "Ooh la la... who doesn't love the delicious flavor of French toast? We added crunch to the sweet taste for a winning combination. French Toasters cereal is baked to perfection. No griddle or toaster necessary to serve up this special treat!"

Upload an image for this cereal
Comments About This Cereal
What do you think of French Toasters?