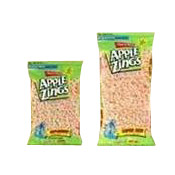 
In 2010, Malt-O-Meal's website called this cereal a "great value alternative to Kellogg's Apple Jacks." The cereal is similar to Apple Jacks in both flavor and appearance.

Upload an image for this cereal
Comments About This Cereal
What do you think of Apple Zings?
By bermuda

I was eating this cereal and found a coffee bean in it.