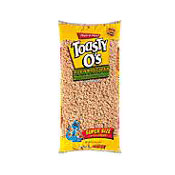 
This cereal was Malt-O-Meal's bargain brand answer to General Mill's Cheerios Cereal (which was introduced in 1945). Prior to this cereal, Malt-O-Meal had introduced their brand of Puffed Rice and Puffed Wheat cereals in 1965. Their Puffed cereals marked the start of a long lasting trend... to offer consumers near duplicate versions of major brand product at discounted prices. Toasty O's were later renamed Scooters.

Upload an image for this cereal
Comments About This Cereal
What do you think of Toasty 0's?
There are no comments yet for this cereal. Be the first! Was it good? Was it bad?
Do you have information not included in the article? Let the world know!