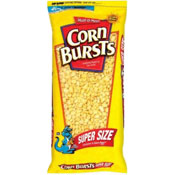 
This cereal was described on packages as a "sweetened popped corn cereal... compare to Corn Pops." This was Malt-O-Meal's bargain brand version of Corn Pops, a cereal introduced by Kellogg's in 1950.

It's interesting to note that General Mills also made a cereal called Corn Bursts in 1966. You can see that cereal right here.

click to enlarge
Corn Bursts And Other Malt-O-Meal Cereals

Submitter: Mr Breakfast
Uploaded: 3/9/2009
Additional details
Upload an image for this cereal
Comments About This Cereal
What do you think of Corn Bursts?

Very good I have eaten the whole bag and think I will have to burn out on them soon but no sign of that yet.