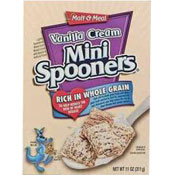 
This cereal has been described on the box as a "lightly sweetened whole grain wheat cereal with natural and artificial flavor." It's Malt-O-Meal's bargain imitation version of Kellogg's Vanilla Creme Frosted Mini-Wheats.

Like many other Malt-O-Meal cereals, the package for this cereal often showed the kangaroo characters of Cool Blue and Lil' Oaty.

Upload an image for this cereal
Comments About This Cereal
What do you think of Vanilla Cream Mini Spooners?
There are no comments yet for this cereal. Be the first! Was it good? Was it bad?
Do you have information not included in the article? Let the world know!