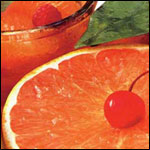 Once known as "the forbidden fruit of Jamaica", the grapefruit is a yellow-skinned, round citrus fruit with a tart and juicy pulp. The fruit is low in calories and high in vitamin C. It contains several cancer-preventing carotenoids including beta-carotene. The white pith contains pectin and bioflavonoids which makes grapefruits an excellent antioxidant food.

Grapefruits are also rich in inositol - a sugar-derived nutrient that helps prevent the accumulation of fat in the liver and aids in the detoxification of metabolic toxins. A number of "grapefruit diets" have been popular for decades because of the fruit's low glycemic index and its ability to help the body burn fat.

Grapefruits can be eaten in segments like oranges, but most people find that the tart pulp requires tempering with a sweetener like sugar or honey. As a breakfast option, the fruit is usually chilled, cut in half, sprinkled with a sweetener and eaten in segments with a spoon. Grapefruit juice is also popular at the breakfast table. A grapefruit is 75% juice. One medium grapefruit will give you 2/3 of a cup of fresh-squeezed juice. 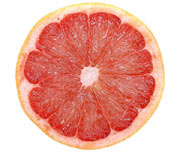 In the grand timeline of citrus, the grapefruit is a relative newcomer. Botanists believe it is the accidental hybrid of the pummelo and the orange. Common recognition of the fruit began in Jamaica and Barbados around 1750. It was originally called a "shaddock" - homage to citrus-shipping seaman Captain Shaddock of the East India Company.

In 1814 in Jamaica, John Lunan coined the name grape-fruit in his botanical work Hortus Jamaicensis. He noted that the fruit tasted similar to grapes - presumable sour grapes. But there is reason to believe that Lunan had already heard the fruit referred to as grapefruit and he was reaching to make an association. The name is more likely derived from the fact that grapefruits grow in bunches similar to grapes and when unripe their green color is reminiscent of their smaller namesake.

Around 1824, the grapefruit made its way to America, specifically Florida, by way Spanish sailors carrying the fruit from Barbados.

Since then, over 20 varieties of grapefruit have been developed in the U.S. The most familiar are the yellow-pulped Duncan and Marsh grapefruits and pink-pulped Ruby and Webb grapefruits. The red-fleshed Flame variety is growing in popularity as its market saturation increases.

Today, the most prolific producers of grapefruit are Florida, California, Arizona and Texas. The four states produced nearly 1 million tons of grapefruit in the 2004-05 growing season. The U.S. accounts for about 40% of total grapefruit production.

A 2005 study conducted by the Smell & Taste Treatment and Research Foundation in Chicago (presented in association with Duke University) found an interesting correlation between the aroma of pink grapefruit and the perception of age. Thirty-seven men were asked to estimate the ages of women in photographs. When the men were introduced to the odor of grapefruit, they judged the women to be 3 to 6 years younger than their interpretation without the citrus aroma.

A study of 57 people by Friedrich Schiller University in Germany found that people with gum disease who ate two grapefruit a day showed significantly less bleeding from the gums.

Recipes with "Grapefruit" in the title:

Recipes with "Grapefruit" in the ingredients:


The editorial content above may not be reproduced without the written permission of Please contact us for reprint requests.
Site Index/Glossary
A|B|C|D|E|F|G|H|I|J|K|L|M
N|O|P|Q|R|S|T|U|V|W|X|Y|Z
Related Terms:
Orange
Banana
Fruit & Breakfast
Healthy Breakfast