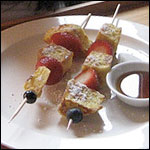 (4 servings)    Printable Version
Cut the bread into 32 1-inch cubes. (You may want to do this the night before as drier bread always makes better French Toast.)

In a large mixing bowl, beat the eggs with the milk, vanilla and salt. Add the bread cubes and gently toss until the cubes have absorbed all of the egg mixture.

Place a large frying pan over medium-high heat. Melt about 1 Tablespoon of butter in the pan for each batch of French Toast cubes. Add bread cubes to the frying pan in a single layer, leaving enough room between cubes so you can flip them around with a spatula. Flipping occasionally, cook until cubes are golden brown on all sides.

(When making multiple batches, keep finished cubes warm by placing them in the oven at 250 degrees.)

To construct the kabobs, poke each skewer through a French Toast cube followed by one or two pieces of fresh fruit. Continue until each skewer has 4 cubes of French Toast and a beautiful selection of alternating fruit.

Serve with maple syrup and vanilla yogurt as dipping sauces.

This is a super fun breakfast idea with limitless potential. The fruits you use, the dipping sauces and even the bread for the French Toast can be easily changed to fit your tastes or the groceries you have available. Enjoy!


Comments About This Recipe
What do you think of French Toast Kabobs?
Overall Average Rating = 5 (out of 5)
Based on 2 votes.

Kabobs. Really. Kabobs. There are some crazy people in the world.

From schweet (Team Breakfast Member)
I love this!! We also do something similar with toothpicks where each cube and fruit has its own little stick. With dipping sauces, it's like appetizers for breakfast. My kids favorite.