(6 servings)    Printable Version
I love this recipe, especially during the holidays when time in the morning seems so limited. I simply put it together the night before and toss it in the oven when I get up. The house fills with the sweet smell of baking. It's a great way to start the day. As with most French toast recipes, make sure you choose a quality bread. I prefer Challah for this one. I hope you like this recipe as much as do. Have a great breakfast.

Prepare a 9x9 baking dish by coating the inside generously with butter or cooking spray.

Depending on the size of your walnut pieces, you may want to pulse them in the food processor just until they're crumbly but not pulverized.

Combine the walnut pieces and brown sugar and place mixture on a large plate. Set aside.

Cover with plastic wrap and refrigerate overnight - at least 6 hours.

Bake at 350 degrees for 30 minutes. Allow dish to cool at least 10 minutes before cutting into squares. Serve warm with additional maple syrup. 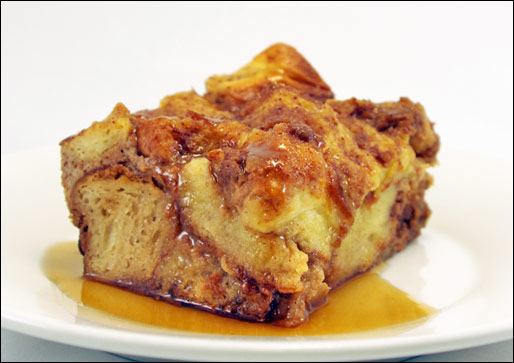 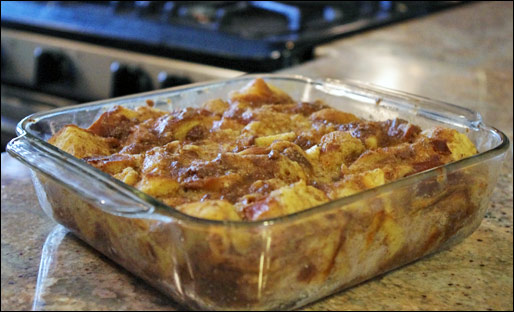 To toast the walnuts, place them in a frying pan over medium-high heat. Cook - tossing occasionally - just until lightly browned and fragrant.

You could replace the plain yogurt with vanilla yogurt. Just omit the vanilla in the recipe.

For a creamier baked French Toast, you could replace the milk with an additional cup of yogurt, but expect more of the tangy flavor associated with yogurt.

If you don't have Challah bread, you can use any essentially white bread that can be cut into cubes. A French loaf works almost as well.

An overnight baked French toast with delicious streaks of nuts and brown sugar in each bite.


Comments About This Recipe
What do you think of Brown Sugar & Walnut Baked French Toast?
Overall Average Rating = 5 (out of 5)
Based on 7 votes.

From Jean
This is absolutely the best recipe in the world. It is my family's favorite. Thank you.

From Westerly
Super yummy. I used a day old loaf of French Bread that I got in the clearance section for $1.49. Worked great. Low cost. Big payoff!

From ehsmith (Team Breakfast Member)
It took over one hour to bake. When I cut into it after 45 minutes, the center was still runny. It's just okay. Overnight caramel french toast is much better.

From Clyde (Team Breakfast Member)
Made it for my family and they loved it.

Is it really necessary to refrigerate it overnight?

From Tanner
Thumbs up! It was like a mix between French toast and coffee cake. It stayed good as leftovers the next day too.

From Tawn
Love this. I'm definitely adding bacon next time!