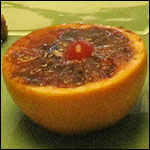 Place in baking pan and bake in preheated oven at 350 degrees for 5 minutes, then broil until top is bubbly. Remove from oven and place in serving bowl and put a maraschino cherry in the center.

If you've never tried it, you'll be surprised how the taste of grapefruit transforms in a wonderful way when it's baked. Enjoy!

Mr Breakfast would like to thank BethH for this recipe.


Comments About This Recipe
What do you think of Baked Grapefruit?
Overall Average Rating = 5 (out of 5)
Based on 10 votes.

From Rachael in NE
I disagree with those comments about it having too much cinnamon. I thought it was just right. It's the cinnamon and butter together that make it taste so good.

From Hawk555
We make this every couple of weeks... love it. I do agree with the other person about too much cinnamon. Just a pinch is all you need to get the right flavor.

From catastic
Pretty good. That's too much cinnamon though. I used 1/2 a teaspoon which I mixed into the brown sugar. That seemed like the right combination.

From bear14
I don't like the cherry on top but this is great! My hubby who doesn't like grapefruit generally loves this.

From The Best Way
I think half the cinnamon. And the brown sugar on top. I made it 3 times and this was the best way.

From saxygirlnyc
Never would have thought that this combination would work but it's AWESOME.

From AntiBreakfast
A tasty, healthy treat - with just enough sweet. Delicious and easy!

From Indy900 (Team Breakfast Member)
This is the best way to eat grapefruit. You can also replace the cinnamon and sugar with honey which is very nice.

From Slim
Nice recipe. Was a fun new way to eat grapefruit. I liked it.

From SallyB (Team Breakfast Member)
I used red grapefruit to make this recipe. The sugar negates some of the grapefruit bitterness. After broiling, I sprinkled the top of the grapefruit with powdered sugar. This recipe will not make you fall in love with grapefruit if you don't already like it, but if you like it already, it's a nice twist.