(2 servings)    Printable Version
Traditionally, baked grapefruit is made with a sprinkling of brown sugar. I actually preferred using honey. It seemed to mellow the tartness of the grapefruit completely, leaving just sweet, citrusy, juicy bites. The instructions about cutting individuality spoonfuls before baking is important. This dish is best served warm and it's a real drag bothering to cut out segments after the grapefruit is hot. Overall, I liked this a lot and will definitely make it again. (This recipe was submitted in 2008. It was tested and photographed in March 2014.) Cut the grapefruit in half. Using a sharp knife, cut around each section of grapefruit meat (this isn't required but it make it easier to eat).

Place the grapefruit halves in an ungreased baking dish - cut-side-up.

Drizzle two teaspoons of honey over each grapefruit half. Sprinkle each generously with cinnamon.

Broil about 3 minutes until the tops are bubbly.

Serve warm as a healthy breakfast main course or as a side dish. 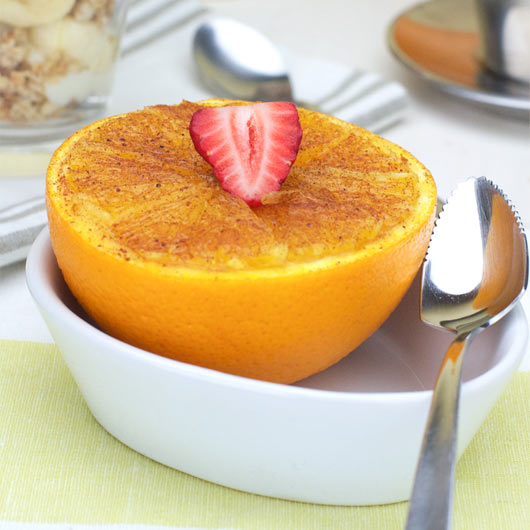 This is a really easy recipe that transforms a grapefruit into something special and different for breakfast.

Mr Breakfast would like to thank wolfblitzer for this recipe.


Comments About This Recipe
What do you think of Baked Cinnamon Honey Grapefruit?

I can't wait to try this. My bf doesn't even like grapefruit, but I'm so excited to see a truly healthy recipe that doesn't have unnatural ingredients or grains. I'm also allergic to eggs. Thanks for posting! I'll let you know how it goes.