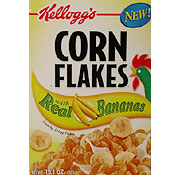 Sometimes I forget how good a bowl of simple Kellogg's Corn Flakes can be. Sprinkled with a teaspoon of sugar, it's a comfort food that conjures up childhood memories.

If we were all on the game show Jeopardy and the answer was "The reason God invented bananas", many of us would say, "What are Corn Flakes, Alex?" It's a cereal that seems custom made to accommodate sliced fruit and berries. The bastardized breakfast cereal industry suddenly seems quaint, wholesome and American when you sit in front of a bowl of Corn Flakes topped with a sliced bananas.

March, 2004: "Now you get the tantalizing combination of your favorite cereal mixed with slices of real banana right in the box!" No, this isn't from an episode of Buck Rogers or Flash Gordon. It's from the back of the cereal box. Similar statements are cropping up all over the cereal aisle. Freeze-dried fruit in breakfast cereal is here, like it or not.

Is that a good thing? The answer is no. Freeze-dried fruit in breakfast cereal is a bad thing. It's a symbol of America gone astray. When did we get so grossly lazy that we can't chop our own bananas? When did we loose respect for nature - the life force that's provided us with fresh fruit since Adam and Eve.

Among that many wonderful things that breakfast can be, it is the first chance of the day for families to be families - sitting together - being together. Here are two pictures: A mother slicing a fresh banana over her child's bowl of Corn Flakes while father reads his morning paper. The smell of rich coffee permeates the air. Here's the other picture: a freeze-dried banana.

My heart cries at the thought of a woman rushing through her morning to make meetings and schedules. Hurriedly, she plops bowls of cereal with freeze-dried fruit in front of her loved ones. Pouring the milk is the last bastion of preparation and care in the family breakfast. One day, she'll be able to just pull a prefabricated bowl of cereal from the cupboard and shake it strongly so the gasses and elements intertwine to hydrate the freeze-dried milk. Then, finally, comes a Jetson's style robot negating the need for mothers to do anything for their children - making human mothers into a gross distortion of what nature meant them to be? nurturers and providers.

To quote Environmental Scientist Jeremy Rifkin, "The modern age has been characterized by a Promethean spirit, a restless energy that preys on speed records and shortcuts, unmindful of the past, uncaring of the future, existing only for the moment and the quick fix. The earthly rhythms that characterize a more pastoral way of life have been shunted aside to make room for the fast track of an urbanized existence. Lost in a sea of perpetual technological transition, modern man and woman find themselves increasingly alienated from the ecological choreography of the planet."

That said, what does Kellogg's Corn Flakes With Real Bananas taste like? It tastes pretty good. It's a lightly sweet cereal and the banana pieces maintain their natural banana flavor - no doubt thanks to a few chemicals. Setting aside my philosophical misgivings, my only other complaint would be the texture of the banana pieces which is similar to Styrofoam. This texture dissipates into more of a banana texture as the pieces absorb milk. But even after several minutes, you have banana pieces that are soft on the outside and somewhat crunchy on the inside.

Final recommendation: Get off your lazy butt America. Chop your own bananas for the sake of our future.

Comments About This Product Review
What do you think of Corn Flakes With Real Bananas?
By DAHRLIN

Please bring it back. I absolutely LOVED this cereal. Nobody makes a good banana cereal anymore.

This was my favorite cereal for a while. I wish they would bring it back.

I never got to try this cereal but it looks amazing and so what if we want to be lazy some of the time... Freeze dried bananas are good! Bring back soon please!

I want this cereal back!

Bring it back please. Gone too soon.

Well, I really hate the Corn Flakes with real bananas. It has bananas that makes the cereal stale.

BRING THIS PRODUCT BACK- I LOVED THIS CEREAL AND WANT TO KNOW WHY THEY DISCONTINUED THIS PRODUCT. There are some copy cats but they include some type of nuts/clusters. Oh, Well!

PLEASE BRING THEM BACK - I LOVE THIS CEREAL. I only seen another brand trying to do the same but with nuts and I don't like nuts just the bananas and cereal.

My husband loved Kellogg's corm flakes with real bananas and so did I but for some unexplanded reason they were disc. It seens then there is a few people like the one R.A. things ever one is lazy in society. this is crazy, that goes taste have to do with laziness. We loved the ceral and was very upset with is disc. BRING IT BACK!! RANDY & CLARA

I pull the freeze dried fruit out of any cereal that has it and put them in a bag to eat later.

It's a lot healthier than eating candy or chips, albiet more expensive.

I like freeze dried bananas the most, they have the most "banana" flavor and I personally like the texture.

I couldn't care less about the corn flakes, they could have packed these in styrofoam packing peanuts and I wouldn't have cared. To me the flakes are the delivery for the crunchy little banana clouds.

Not all of us have the luxury of being raised or living in your ideal world. Freeze dreid products give us all the health of fresh fruits without the waste of a rotten banana or the need for preservatives. These cereals are much better than your sugar loaded ones.

I just read a couple of reviews. Just wanted to add my two cents. I loved the cereal. Actually, it has become one of my favorites. I like the bananas just the way they are, crunchy. Gives the cereal a good texture and taste. Thanks.

I too abhor the laziness endemic in society today. But nevetheless I tried Corn Flakes with Bananas and had a vastly different opinion. Perhaps the product was out of date, but the bananas never re-hydrated. They were hard as rocks. I am probably going to toss the box and go out and buy some bananas.