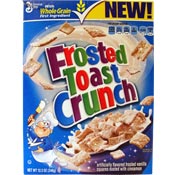 I think this cereal accomplished what it set out to do. You get a taste similar to vanilla frosting. If you've ever snuck a spoonful of Duncan Hines vanilla frosting, the flavor here is somewhat reminiscent. It's a very sweet cereal with a light, familiar crunch.

I recommend trying this cereal if you already like Cinnamon Toast Crunch. It's a fun, flavorful cereal. If you're looking for fiber and vitamins, keep looking.

By the way, if anyone from General Mills is reading this review, I'd like to bring your attention to a growing community of cereal lovers who want Peanut Butter Toast Crunch to come back. That cereal was also a little better than this new variety.

Comments About This Product Review
What do you think of Frosted Toast Crunch?
By HillGirl

One of my absolute favorites. It's a shame it's discontinued. The vanilla flavor really comes through and is really distinct. It's like eating frosting without actually eating a can of a Pillsbury frosting. Not that there's anything wrong with that. Sometimes you just need some sugar.

Please bring these back. I've been looking all over for them. They were my breakfast, lunch and dinner!

I love this cereal. Definitely in my top 5 of all cereals. I love frosted anything and I also love Cinnamon Toast Crunch. So, this is the best of both worlds. BTW, my favorite cereals are Cap'n Crunch, Krave, Smorz, Count Chocula and Frosted Toast Crunch.

I like the original CTC better. I think the sugary coating is distracting, and a bit too sweet for me.

One of the few new cereals in the past couple years I've re-bought several times - of course, I'm a *huge* fan of the original.

I'm here to tell you that I did not notice the vanilla in this. The squares seem smaller and they are dusted white and are a lot sweeter tasting to me than CTC. The cinnamon flavor is also fairly muted. I also noticed it seems to get soggy in milk pretty quickly leaving a huge icky factor.

I'm a huge Cinnamon Toast Crunch fan and was excited to try this. Frosted Toast Crunch is definitely not as strong tasting as CTC. It's sweet and mildly vanilla and the texture is exactly like CTC. I liked it but didn't love it; it won't become something I often pick up but I wouldn't mind it once in a while.

I just picked up a box of this cereal and I love this stuff! I like Cinnamon Toast Crunch pretty well, but sometimes I find the cinnamon flavor to be a bit aggressive. I like that there's just a hint of cinnamon flavor here. If you've ever had Chex "Muddy Buddies" (a.k.a. "People Puppy Chow), this cereal reminds me a little of a chocolate-less version of it. The vanilla sugary coating is addictive!