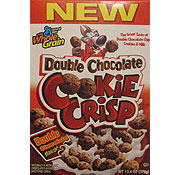 The original Cookie Crisp cereal had a sort of magic. The whole idea of eating cookies for breakfast had a devilish lure. When you looked at the side of the cereal box and saw there were a few vitamins, the health conscience side of your brain gave a reluctant okay signal to the side of your brain that wants to snack and sleep with sexy people. The original cereal pieces followed suit. You could taste "cookie", but in the end you could always tell it was attached to a cereal piece that had a few nutrients squirted in.

The cereal pleased the little fat kid in me, but the slim attractive adult in me said, "Whoa... this is just a little too sweet". I was a tinge disappointed that the milk didn't take on much chocolate flavor.

This cereal ranks below many other chocolate cereals when it comes to chocolate flavor. Count Chocula, Cocoa Pebbles, Cocoa Puffs and Cocoa Krispies are all better choices.

Comments About This Product Review
What do you think of Double Chocolate Cookie Crisp?
By Super Fan

Your opinion on cereals has become discredited in my eyes because this is assuredly one of the top 5 cereals known to man.

I would say that I started eating it two years ago, but within a year it wasn't around anymore. I still look for it but never find it. It drives me nutso!

I love this cereal but I just can't find it anymore :-(

I managed to find a box of 12 double chocolate cookie crisps. It was like a treasure hunt. I thought that quit selling them! So I bought them all. Too bad I can't find more. But at least I found some here in Stockton.

I bought this for my grandaughter and she loved it. When I went to buy another box... couldn't find it anywhere. Where can I get another box?

I have once purchased this cereal at Wal-Mart during the holiday season of 2007. It was like love at first sight. It was absolutely awesome and I enjoyed every bite of it. But sometime about two weeks later, this cereal was no longer on the shelves and nowhere to be found in any other store. This edition of Cookie Crisp was a once-in-a-lifetime experience and I wish that it would come back someday. I would avoid it during the summer months, however, since my cocoa-related allergies exist mostly during May through October.

Can't find it anywhere. What happened to the peanut butter flavor? was that discontinued? I wish they'd bring back the vanilla crisp. Just have the vanilla, the chocolate chip, and maybe keep the double chocolate. That would be great.

By Not A Big Fan

This cereal taste like wooden chips with chocolate on them sorry but Fruity Pebbles are WAY better try something else put some marshmallows or something it.

I love Cookie Crisp sooo much it should be illegal.

I LOVE this cereal and I think it is much better than regular Cookie Crisp. The only problem I have is finding it in our grocery stores. We have one store near us that sold it and that's how I found it. Now they don't sell it so I'm going to have to purchase it online. Oh, well. At least I can get my fix somehow. :-)

I loved this cereal.

I wouldn't say that it isn't too bad. It does have alot of chocolatey sugar, though. Why do some people need the code on the bottom of the box?

Although this product is classic for kids, the chocolate has a FAKE TASTE!!!

I think the cereal is pretty good if I do say so myself.

And for those people allergic to peanuts, the box says in bold letters(mind you they aren't very big) "Contains Soy, Wheat, Milk, and Peanut Ingredients"

Not sure if they added that AFTER they saw people breaking out with allergic reactions, but still, the box DOES say that it contains peanut ingredients.

Other than that, VERY sweet, but very tasty.

Anyone who says this cereal is bad is a liar.

p.s.
"disgusted" really needs to learn how to spell and use proper grammar! yeesh!

By NO TO PEANUTS!

ALLERGIC TO PEANUTS?? THEN BEWARE!!! I BROKE OUT IN SEVERE RASH, COULDN'T BREATHE,WAS HOSPITALIZED FOR 2 DAYS!! AND YES... I AM ALLERGIC TO PEANUTS!!! HERE COMES A LAWSUIT GENERAL MILLS NOWHERE ON THE BOX DOES THIS STATE "CONTAINS PEANUTS" IN BOLD LETTERS AS ANY OTHER PEANUT CONTAINING FOOD WOULD!! AND FLAVORWISE: DON'T REMEMBER... I WAS 2 BUSY TRYING TO BREATHE DUE TO MY ALLERGIC REACTION

I think eating a bowl of these rotten thing is just like having a marzbar for breakfast. I think it is descusting what they are selling for kids. No wonder most kids are obease, it is because chocolaet brekfast cirials, like chocolate cookie crisp. And who ever made this thing about chocolate cerial should be sued. I am very disaponted. And some children have it for lunch and gess what tea as well! or supper even. It should be band! Thank you for leting children become daiebetic!

My kid broke out in horrible rash from this cereal. Beware.

Unlike the regular Cookie Crisp, this one contains peanut flour... people with peanut allergies... BEWARE!

Yeah, I hate the cereal it stinx but cuz there was a code for millsberry I bought it. The code is 0C0K51E.

I thought it was a little too... extreme.
I love eating kids' cereal, but this was too much.

I don't eat much cereal at all, but I got this for my grandson, we both love it! (I'm a chocloholic)

They are alright. I just like the regular ones better but they are still pretty good. I just don't really like a lot of chocolate.
- Kenzie Cook

What is the numder on the bottom or top of the box i need to know it please. thank you very much!

I hate it and I crave chocolate all the time. But I want to buy one box of it because there is a code on it that I need. Where is it available?

By Not Too Good

I did not like it at all and I love chocolate which I found pretty strange.