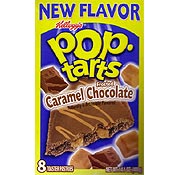 I get hundreds of emails each month from hundreds of wonderful people. And every so often I get an email from a bad apple. Recently I was sent an email that said, "Mr Breakfast, how can you promote Pop-Tarts for breakfast? It's unforgivable!!!"

My official stance is that Pop-Tart style products are candy bars... some of the best candy bars on the market. Given the billions of options we have for breakfast, I don't recommend chucking a Pop-Tart in your mouth and calling it breakfast. But I also have to admit that I'm as guilty as the next guy for grabbing a donut or a Pop-Tart for breakfast when time is a consideration or if I have an insatiable urge to be decedent. I'll state for the record... mothers don't feed your children Pop-Tarts. Visit our healthy breakfast section and raise a healthy child.

But Pop-Tarts are a permanent part of our American breakfast landscape, so I'll continue to review them and enjoy them when they taste good. So before a jerk like Sherry Sykes of Albany, New York sends me an email saying what a disgrace I am for promoting Pop-Tarts, I hope they'll explore the site first. Sherry Sykes of Albany, New York... I think it's "unforgivable" that you write complaint emails without being informed.

With that nastiness behind us, let's start talking about the very tasty new Caramel Chocolate Pop-Tart, instead of that dopey jerk Sherry Sykes of Albany, New York. The second you take this pastry out of its silver sheathing, it smells like a delicious brownie. When toasted, you get a distinct, but not overpowering flavor of caramel. The inside is a gooey treat. The chocolate flavor is similar to Kellogg's other chocolate pastries, but the caramel gives it a new and interesting twist. You might expect it to be too sweet. It's not.

For those of you that opt for un-toasted Pop-Tarts as an afternoon snack, this one isn't so great. It takes toasting to merge the chocolate and caramel flavors. "Fruit" filled Pop-Tarts are always better un-toasted options.

A woman I'd just had sex with tried a toasted Caramel Chocolate Pop-Tart and said, "This is really, really good. I don't think they can make a better Pop-Tart." I liked it a lot, but not quite that much.

"Mr Breakfast, did you just say what I thought you did?" I did and you'd be validated in writing a complaint letter. "Was Sherry Sykes of Albany, New York the woman you had sex with?" No way, man.

A one pastry serving contains 200 calories and 1.5 grams of saturated fat. Trans fat information is not listed.

Comments About This Product Review
What do you think of Caramel Chocolate Pop-Tarts?
By Donna_k

I Donna Kitchen am letting you know that I am suing you, Your product burnt me and gave me possible fourth degree burns on my left four fingers. I will be getting ahold of my doctor and lawyer tomorrow morning: 12-23-09.

This was my favorite flavor of poptarts. I'm very disappointed they have been taken off the market.

Mr. Breakfast, YOU ARE THE MAAAAAN for writing this review! You tell that sherry chick right where to shove these Pop-Tarts! And if you ever read this lady your kid probably hates you anyways so just keep your Pop-Tart hating comments in your stuck up mother brain. This is my all time favorite Pop-Tart flavor but can't seem to find them anywhere... it's a shame really :(

Why they discontinue this flavour? It was one of my favorites!

I love these but I can't seem to find them.

This is the greatest pop tart ever! Now its hard for me to find them.

I think they should make them better and more interesting!

After giving it a shot, I feel in love but you could still try a new taste.

I think that they r nasty. I'm a kid and there are certain things I don't eat like that gooie stuff inside. Maybe u could change the taste so it would tatse better!!