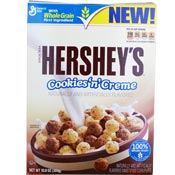 I have one great thing to say about this cereal... what a pretty box! And that's where the complements end.

The flavor is a bit confusing for the first couple spoonfuls. You get a minor sense of cookies and cream, but you also get phantom notes of peanut butter and malt. It starts as a mishmash of flavor and then, midway-through the bowl, settles into a dull general sweetness with lazy nod to a chocolate chip cookie.

The cereal pieces are quite a bit smaller than they appear on the box. They're crunchy for about two minutes. Three minutes into it, some are crunchy and some are not. Five minutes into it, the texture begins to get gummy. If you try this cereal, pour small bowls and eat them quickly.

Sadly, this cereal does a disservice to the good name of Hershey's. There's very little chocolate flavor and it won't remind you of Hershey's awesome cookies 'n' cream candy bar.

I might be coming down a little hard on this one because I expect a certain amount of quality from a Hershey's product. Because of that possible bias, I'm adding one Golden Egg to a dismal rating of 2 Golden Eggs. I do not recommend this product. 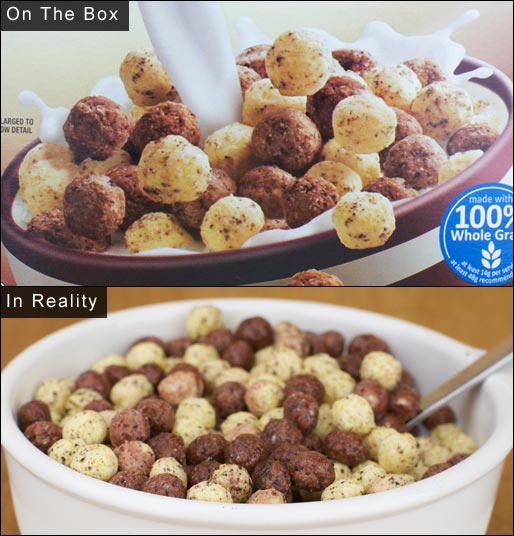 Comments About This Product Review
What do you think of Hershey's Cookies 'n' Cream?
By Ruch

My grandson loves this cereal but I can no longer find it for him.

I wanted more from this cereal as well!

Couldn't agree more. What a disappointment!