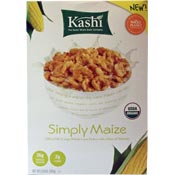 Simply Maize is simply bland. It's a puffed corn flake cereal flavored with molasses. The taste is similar to Corn Pops minus the sweetness.

The flakes have a nice initial crunch, but as you chew they start to feel feel tough and gritty with a tendency to get stuck in the crevices of your teeth.

I understand a cereal that wants to exploit the flavor and goodness of corn. But to really get the best out of most simple flavors, you need something to contrast them to. Presumably, that contrasting flavor was meant to be molasses but there's just not enough to make any kind of impact. The resulting flavor is corn, nothing more and nothing less. I guess that was the point.

The nutritional profile of this cereal is not impressive enough to make you bored silly at breakfast. There's only 2 grams of dietary fiber and 2 grams protein. For a better Kashi cereal, try their Golden Goodness flakes. Simply skip Simply Maize. 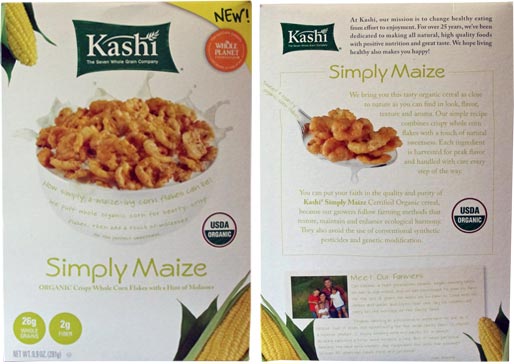 Comments About This Product Review
What do you think of Simply Maize?

This cereal is not only AMAZING, it is also really good for you. I am not sure why there are negative comments but who cares I love it!

This cereal is NOT bland at all! If you're comparing to Corn Pops, then yes it's less sweet, but I think it's just the right amount of sweetness for a light, crunchy, tasty cereal.

Food is for fuel. I want good quality fuel because I demand a lot from my body. This is good fuel that is not full of other GMOs. Too bad everyone thinks food is for pleasure... maybe there would not be so many health issues.

Simply Maize is the bomb! It's healthy! No wheat... no fuss.

I really like it, but it's hard to find here in South Florida.

Pleasantly surprised. Crunchy with great flavor and a little sweetness but not too much sweetness. I had not read of the bad reviews but I'll be buying again anyway.

I loved this cereal. My husband picked it up as we are cutting back on our wheat and we are addicted to it now.

I'm surprised by the negative review. I think Simply Maize is really good. I love the fact that there are only four ingredients, with no artificial colors and flavors. It's not very sweet, but that's why I love it. Most cereals have too much sugar. This has just enough sweetness to be tasty, but not too much. If you want more flavor and sweetness, try adding a sliced banana or some berries to your bowl of Simply Maize and milk. Yummy!

I'm not a fan of maize, but this review was just wrong. Furthermore, maize is a great natural energy source. It gives your body energy, that is the important thing. If I were to go to the store and ask for a corn based cereal, they would think I was crazy. This cereal is to be enjoyed as part of a larger breakfast, it was never intended to be eaten on its own. If you do eat it on its own, add a few things like sugar or even lemon juice. they can't do all the work for you. It's like you're asking a cardboard box to do everything for you.