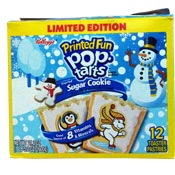 As for flavor, there's mixed reviews. Personally, I thought they tasted alright. The filling tastes like frosting. You don't expect any kind of flavor explosion from a sugar cookie. So I wasn't disappointed.

I asked two other people to try these Pop-Tarts and the reviews were less than positive. One person simply shrugged and said "blah". I asked what that meant and was told, "They're kind of boring." The other person actually called them gross and said the filling reminded him of uncooked dough. (I could sense what he described if I ate the Pop-Tarts raw, but that taste of dough seems to disappear once toasted.)

If your expectations are low and you appreciate the kid-friendly winter characters printed into the frosting... go for it (but be sure to toast them).

If you're treating yourself to a Pop-Tart and only have them a few times a year, avoid these. Almost every variety of Pop-Tart (except Ice Creme Sandwich and Vanilla Milkshake) tastes better. 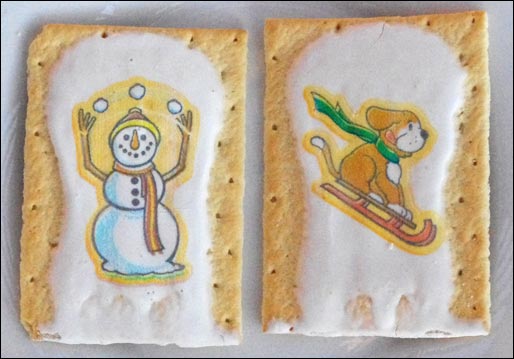 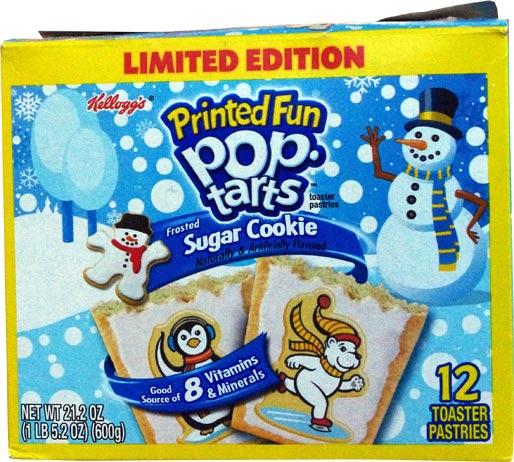 Comments About This Product Review
What do you think of Sugar Cookie Pop-Tarts?
By Rainbow

I love them! I wish they would sell them year round!

Pretty darned tasty! I found a few boxes at big lots for $1.70 and figured I should at least try them at that price. I think I will go back for the rest tomorrow.

They are dangerous! Both my son and I got burned by the frosting that is like burning marshmallow when hot. It adheres to your skin! I just left an urgent care center where they diagnosed my son with 2nd degree burns. Kellogg's has got to address this issue.

My favorite kind of Pop-Tart!

Hands down, the best Pop Tarts for me!

They're back. Just saw them at Target. Hope they're new and not just left over from last Christmas.

I have been trying to get them. We want to try them, but around here no store ever has them, so disappointed. I even checked Walmart web site, they always seem to have the pumpkin pie kind but we want the sugar cookie. Anyone?

I hope they start selling them again this winter.

I liked it better than you did. Not the best Pop-Tart, but still pretty good. My favorite is the regular strawberry one with frosting.

I loved the Sugar Cookie Pop-Tarts. Please put them back in stores immediately.

My Daughter and I love these. Especially warmed they taste like a fresh baked cookie. Now I guess you have to love sugar cookies to appreciate these.