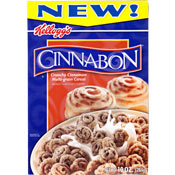 This cereal is great. If you like cinnamon and aren't bothered when a cereal flaunts its own sweetness, definitely give Kellogg's Cinnabon Cereal a try.

I'm stating this review with a strong approval statement, a line I'd usually reserve for the closing paragraph. We breakfast journalists call this "opening with the kicker." I really want people to know this cereal is good because it's being released to grocery stores with an identity crisis.

The last time a cereal came out with the Cinnabon name was only two years ago in the summer of 2008. There were actually two cereals: Cinnabon Cinnamon Crunch and Cinnabon Caramel Pecan Crunch. They were produced by the Organic Milling Corp. and they were terrible. They tasted like unprocessed wheat with burnt cinnamon (click here for a more detailed review) and they offered nothing in the way of a fun, delicious Cinnabon cinnamon bun experience. Because the Cinnabon logo is so distinct and featured so prominently on all three Cinnabon cereal boxes, consumers may very well see this new cereal and dismiss it as a loser from the past. If you see the Kellogg's name, realize that we're dealing with an entirely new cereal... a much better cereal.

In the reviews for the earlier cereals, I mused about the indulgence of Cinnabon Cinnamon Rolls... the wonderful smell from the Cinnabon stands and the gooey, creamy sweetness of the actual rolls. While the earlier cereals captured none of that, new Kellogg's Cinnabon Cereal at least brings that experience to mind.

This new cereal is loaded with cinnamon flavor. When you add milk - and when you're thinking about the cinnamon rolls pictured on the box - you actually get a sense of icing or frosting. The cinnamon bun shaped cereal pieces have a light crunch which stay mildly crunchy upwards of 8 minutes in milk. 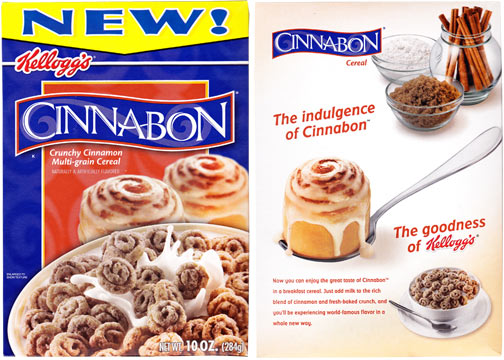 Obviously, this cereal is sweet. The second ingredient is sugar. The third ingredient is "cinnamon topping" which lists its first ingredient as sugar. That said, it's amazing that this cereal maintains a sugar content of 12 grams per one cup serving. That's two grams less than a 3/4 cup serving of the latest cereal from Wheaties called Wheaties Fuel. It's only two grams more sugar than the Cinnabon predecessor cereals, but that minimal boost makes an extreme difference in flavor.

Kellogg's seems to understand what makes a cinnamon bun work. Throughout time, we've gravitated toward those delicious baked goods because they're sweet, cinnamon-blasted treats. This cereal tastes like a treat.

Comments About This Product Review
What do you think of Cinnabon Cereal?
By Soraya M

Hands down my favorite cereal. I wish they would start making them again.

Love it. It's the only cereal I truly like and will eat.

By Gal from TN

Why was this disconnected?? Even if some people didn't like it, there are others like myself who really enjoyed it, both as breakfast and as a snack. Are you saying it is gone forever? When I did find it, I would buy all they have in stock. I would certainly like to be able to get it again. Please bring it back. Could I buy a whole case from the company? or even more.

Where can I find Cinnabon Creal in Oakland, CA? Been looking everywhere with no luck. Thank you!

The fact that I looked up the reviews of cereal says it all. Ya, I have a problem.

I loved this! I was half obsessed with this stuff! Too bad I can't find it anymore.

My husband loves this cereal. I didn't like it but I just tried it for the first time and I actually like it. Can't find it anywhere but the family dollar store. My husband buys up the whole shelve.

Love the cereal! Are they still making it? I can't find it anywhere.

This cereal is awesome but I can only find it at the "Dollar General" store.

Love it, want it... what has happened that Kellogg's is no longer making it? Bring it back!

My husband loves Cinnabon cereal because of the taste and it stays crunchy. But WHERE IS IT? All the stores are out of stock, what gives?

I am neither a cereal eater or one who eats a lot of sweets, but this darn cereal just kept calling me from the container I kept it in. Unfortunately, I cannot find it now. I've been in 3 different markets - empty slot just waiting for Cinnabon boxes! What happened?!?

I'm not one for sugary cereals, but I love this cereal. It's good and tastes identical to a cinnamon bun. Not exactly Cinnabon, per say, but pretty darn close.

One of my favorite cereals for sure... Cinnabon cereal is everything you could ever want in a cereal. I suggest combining this with waffle crisp and you will not be disappointed.

Awesome cereal. Would be better if it could be sweetened with Stevia.

Having it for the first time today. The milk makes the pieces really soggy, and the flavor is very bland.

I found mine at the local grocery outlet. Love em'! The person who said they weren't good needs to go eat a box of plain boring Cherrios.

I LOVED this cereal. Help! I think I ate half a box when I first bought it.

I am a member of Weight Watchers so I ate this as a snack instead of a breakfast food and it took the place of cinnamon rolls for me.

PLEASE think about making this into a dieter's/diabetic cereal. Add at least 3 or 4 grams of fiber per serving and sweeten it with enough Splenda to make it as sweet as this is and market it to DIETERS AND DIABETICS. If we had this cereal, full of fiber for the filler, it would be terrific, wonderful, great.

PLEASE CONSIDER THIS FOR ALL OF THE HEAVY, AND WEIGHT FIGHTERS AND DIABETICS.

THANK YOU FOR YOUR CONSIDERATION.
SHARON P. WIGINGTON

This cereal is terrible. Cinnabon now makes breakfast bars that are truly delicious (if heated up in microwave) and they taste exactly like a real cinnamon roll. Since the bars came out so well I figured I'd try this cereal a shot. Its awful and taste NOTHING like a cinnamon roll. Cardboard taste to the extreme. Then again I'm used to only eating Kellogg's flakes with strawberries and other non-sugary cereals.... so maybe that's why I didn't like this one. Who knows.

Ummm... Kellogg's used to make this cereal when I was a kid in the early 90's... except it was called Cinnamon Mini Buns... I am shocked Mr. Breakfast did not know this.

Cool! Just found your site, while searching for cereal recipes. (Got a ton of Kellogg's cereals almost for free...) Thanks for the reviews! I'll eat this on with some more appreciation now! :)

This cereal tastes exactly like I remember Cinnamon Mini Buns cereal from 1991-1992. I think it's actually the same cereal with a different name. I just bought a box yesterday at my local WalMart Neighborhood Market.

Anyone remember Cinnamon Mini Buns cereal? I think this is it's descendant.

It's also something else that General Mills had out a while ago but discontinued about 2-3 years ago.

Mini Swirlz are back!!!

I love the cereal but can't find it anywhere.

I love this cereal. After running out of it last month I went to get a few more boxes, but there was none. So I went to several other stores. Someone finally told me that they were discontinued and I could have died. I'm still suffering...

I agree it's Mini Swirlz with a brand attached to it and not a truly original cereal. It's too sweet for my taste as well.

I think it is a reboxing of Cinnamon Swirlz since Kellogg's just took them out of their line even though they were a best seller. But they also produce the Cinnabon bars so it would make sense for them to just take the Mini Swirlz and put the Cinnabon name and logo on them.

This cereal reminds me of the previous cinnamon cereals that was made by King's I feel this is a remake of King's Cinnamon Mini Buns or Cinnamon Mini Swirlz but aimed at adults now.