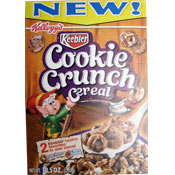 The box notes that this cereal contains "2 Keebler cookie favorites - Fudge Shoppe Fudge Stripes and Chips Deluxe". The Chips Deluxe cereal pieces actually look like miniature versions of the popular chocolate chip cookie. Unfortunately, that is the only positive thing I have to say about this cereal.

Sadly, the lame flavor isn't the worst part. Whether eaten dry or eaten with milk, this cereal gets so immediately mushy in the presence of liquid that it actually sticks to the backs and crevices of your teeth. It's sticky and gummy.

I wanted to like this cereal. Seeing the Keebler elves on a cereal box was a treat in itself. Sad to say, those fictitious little elves that bake cookies in trees really need to reexamine this recipe.

Keebler Cookie Crunch Cereal is a loser... the worst cereal of 2008 (so far).

Comments About This Product Review
What do you think of Keebler Cookie Crunch Cereal?
By G.R. Badge

Good riddance. This cereal tasted okay for the first bite and then it turned to mush and was like eating glue. Not sad to see this one get discontinued.

My Daughters and I called to complain. WORST CEREAL EVAH!!!!

This is the worst cereal ever made. It seriously makes me nauseous... The cereal becomes so disgustingly soggy and the flavor is absolutely putrid... YUCK!!!

For children or people who have braces, the mushiness of the cereal is excellent. I am surprised that you say there is no chocolate in the cereal. I would buy this cereal a million times because the taste never gets old.

Bunch of derps doing the reviews on this site. I find this cereal to be most enjoyable and controvert the contravening recapitulations regarding this cereal. Derp. Derp.

I agree I though the cereal had expired or something when I tasted it!!! I think they forgot to add sugar and something to maintain freshness to it!

This cereal is great!!! The only problem is getting it cause most stores don't sell it.

Yum. I liked this one.

I LOVE THIS CEREAL!! Really, I go to a grocery store that sells it and buy 4 boxes at a time, then when its sold out there i go to the other one thats just a little further away.

Everyone that doesn't like this cereal is absolutely crazy. If you want more of the chocolate flavor, have it with chocolate milk instead. Chocolate milk is always a better substitute in cereal than regular milk.

You guys are crazy, this cereal tastes amazing! I love the soggy texture. This is definitely a treat I will look forward to on my sweet tooth days.

Wow - I must be off on this one Mr. B but I think it's fantastic! I actually eat it with almond milk and I think it's an out of this world treat - really. I plan to save the box because it seems doubtful it will be around long plus I'm sure general mills will sue because the name is too close to cookie crisp. I read the comments here but I love the texture. It is a little weird but it's kind of like marshmallows and almost like a cookie dough. I think it's very unique and almost decedent. It's absolutely unhealthy but if it stays on the market, on occasion I'll treat myself to a bowl. Almost afraid to but I'm going to try some straight from the box now. In my opinion if they stick with it for a while, it might really catch on.

I wanted to like this product but was appalled by its poor quality. The worst part is that it sticks to your teeth. I am glad to see that this cereal is universally reviled, I cannot believe Kellogg would put their name behind this product.

What seanjkil said. Though, they are no replacement for Cookie Crisp, which NEVER goes on sale :O

I am with you Mr. Breakfast, this cereal is the worst!! From the instantly soggy factor to the slimy, greasy film it leaves in your mouth. I too found it bland, not nearly as sweet or chocolaty as it should be for the amount of sugar per serving. Also the individual peices are way too small(maybe why it gets soggy so fast?). Plus the ratio of "Chips Deluxe" peices to "Fudge Shoppe" peices was way off, my box was 80% the former and only 20% the latter, which was extra dissapointing since the chip peices tasted much better. I actually called the Kellogs hotline, and asked for a refund!

This is the best cereal probably ever. I went out my way to come here, and say that. That's how good. Also I go to a market that carries it just to get the cereal and buy it in 3's. I agree with those who say.. the best part is that it's mushy... How it's soft and sticks.

Fantastic.. hope it never goes away.

I love this cereal so much I can't buy it because i'll eat the whole box in one sitting. It is the texture that i love the most. If i had to say anything negative it would be that it's not filling.

I enjoy the cereal, but it turns my poop a greenish color. I'm not being silly; I hope it's a dye in the cereal rather than some other ingredient that affects this change.

It was decent, a little better than Cookie Crisp, which I don't really care for much anymore. Much better than the review claimed, but not as good as I was hoping.

I agree, this is the worst cereal since Kellog's Smores cereal (which tasted like a box of salt). I couldn't even get through a bowl of cookie crunch. I gave the cereal away.

You negative guys are crazy have you ever had cookies and milk it tastes just like that you morons. Maybe your mother's did not love you enough to let you have milk with your cookies mine did you suck.

Wow, I totally have to disagree! the 'mush' feeling the 'fudge stripe' cookies get when in milk gives it a marshmallow feel and texture while the other cookie stays crunchy. I will be buying more, I really like this stuff, for both snack and cereal!

Could not agree with you more - this product was completely disappointing. I was so excited to try it after I bought it, but I couldn't get rid of the box fast enough after I did so. This cereal disgraces both the Keebler and Kelloggs names!!