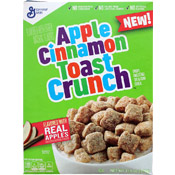 Apple Cinnamon Toast Crunch tastes pretty good. The flavor is more playful than Apple Cinnamon Cheerios but less playful or kid-like than Apple Jacks. The smell of apples and cinnamon is apparent and strong when you open the box and that's the flavor you get.

The more you eat - the more that apple tastes like apple flavoring as opposed to the real thing. But it's still pleasing and pretty much exactly what you'd expect.

The cereal is quite crunchy at first. The tiny toast-shaped pieces stays crisp for about 4 minutes. Once they soften, they feel slightly spongy but not irritatingly so.

The milk at the end of the bowl is speckled with cinnamon. It tastes sweet but has very little cinnamon/apple flavor imparted from the cereal. 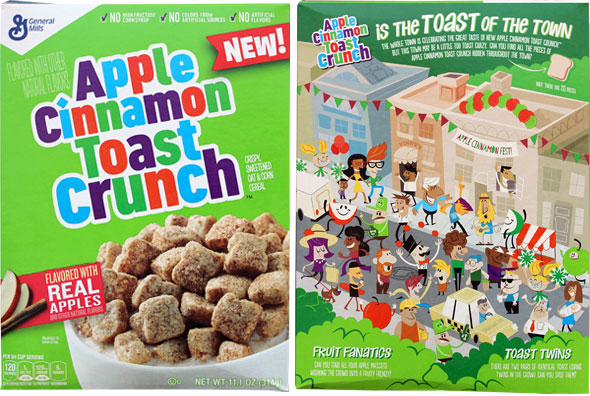 When eaten dry, the flavors of the cereal may seem a little overpowering. They mellow and become more enjoyable once doused with milk.

Apple Cinnamon Toast Crunch is just okay. I'm sure I'll finish the box, but I'm not sure I'd be inclined to buy another.

The $0.00 price shown below indicates that the company sent us a sample box of the cereal for this review.

Comments About This Product Review
What do you think of Apple Cinnamon Toast Crunch?

This is definitely a new favorite! I actually taste the apple in it. The balance of cinnamon is perfect!

I have this box at home. I tried a few dry bites this morning. I think they did an awesome flavor combination.