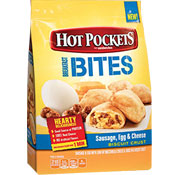 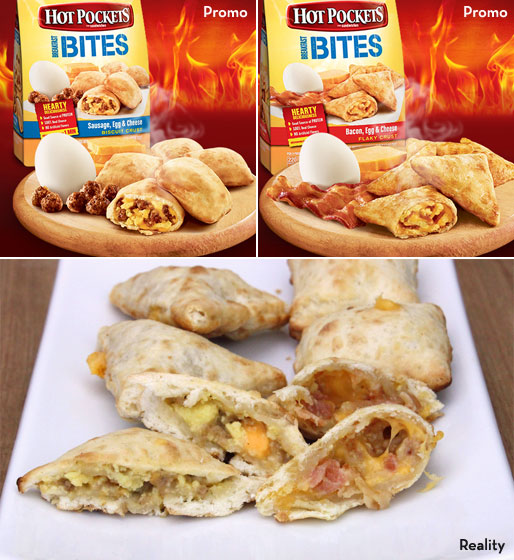 The sausage variety is surprisingly, pleasingly sweet. It has what they're calling a "biscuit crust". If you made a biscuit that tasted like the crust, you might say, "Dang it. I used too much sugar." But that sweetness contrasts the with hearty flavor of the sausage, egg & cheese and added a little whimsy to an otherwise familiar collection of flavors.

In comparison, the bacon variety is more savory with a touch of pepper noticed in every bite. It has a "flaky crust", which is more similar to the crusts of most full-sized Hot Pockets. The bacon has a noticeable smokiness that I liked.

The ratio of filling to crust in both varieties is satisfactory. It might not be technologically possible, but a little more filling would have given each ingredient a chance to be noticed. As it is now, you take a bite and say, "That tastes like breakfast" instead of recognizing any star ingredient.

Someone in the office commented that these would pair well with a dipping sauce like ranch dressing or gravy.

In the end, these are fun, tasty and satisfying... IF they're BAKED. I give this product a 6 out of 7 when baked and a 3 out of 7 when microwaved, which I'll round up to a fairly impressive rating of 5 golden eggs.

Comments About This Product Review
What do you think of Hot Pocket Breakfast Bites?

PLEASE BRING THEM BACK. They were absolutely delicious. I have them nearly almost every breakfast. They were so great, wanna know how I cook/bake them... I use a TOASTER OVEN a godforsaken Toaster oven... The inside was gooey cheese everything and the crust on the outside was crispy and when I'm not eating them I put them in the freezer. I can't show a picture of them right now because they stop selling them in my store but I can tell you this they were absolutely incredibly delicious so please just this once bring them back. I don't care what they look like in Reality or in Promo.