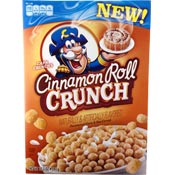 On the box, Cap'n Crunch is holding up a steaming, frosting-covered cinnamon roll. It looks mouthwateringly delicious. This cereal is not nearly as good as that cinnamon roll looks, but it's not bad.

It basically tastes like Cap'n Crunch cereal with an infusion of cinnamon - nothing more and nothing less. The nod to a fresh cinnamon roll appears to be just a marketing decision. There's nothing creamy or buttery about the cereal that would bring a cinnamon roll to mind.

If you don't expect too much, you won't be disappointed. The cinnamon flavor is plentiful. The airy round nuggets stay crunchy in milk for about 5 minutes. I enjoyed this new cereal. I won't rush out to buy another box, but I'm sure I'll enjoy every spoonful of what I've got.

Comments About This Product Review
What do you think of Cinnamon Roll Crunch?
By Hunter-m3

Wasn't bad, but I'll stick with Cinnamon Life for my cinnamon fix. Probably a one time buy.