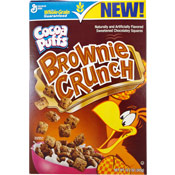 If you're coo-coo for Cocoa Puffs, you'll probably be coo-coo for this cereal. It tastes almost exactly the same.

New Cocoa Puffs Brownie Crunch - true to it's name - is crunchier than the original cereal which was introduced way back in 1956. The cereal pieces look like square versions of Double Chocolate Cookie Crisp cereal (also General Mills; 2006) as opposed to the puffed balls of original Cocoa Puffs. Small dark specks dot each piece of this new cereal. While they give a visual impression of mini-chocolate chips and help cement the illusion of tiny brownies, the specs have no real effect on the flavor. This cereal has the same relentless chocolate flavor of Cocoa Puffs - that slightly artificial cereal-chocolate that so many of us love... thanks more to childhood memories than an appreciation of flavor.

For those who measure the worth of a chocolate cereal by the amount of chocolate milk in the bottom of the bowl, you won't be disappointed. This cereal produces more chocolate milk than Count Chocula and maybe a smidge less than Cocoa Pebbles. 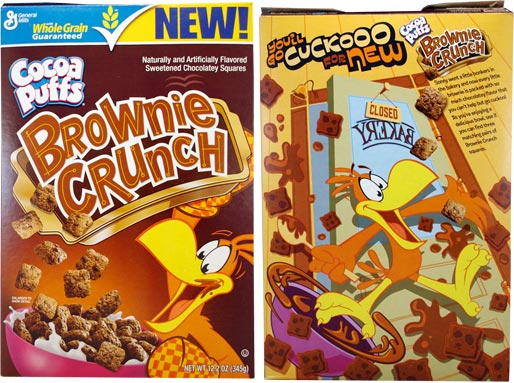 
Comments About This Product Review
What do you think of Cocoa Puffs Brownie Crunch?

To me, it's like Captain Crunch meets Coco Puff - and that's a good thing! (Honestly - not much different than the original - but a crunchy upgrade!)