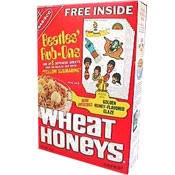 From: Nabisco
Introduced in 1954


This cereal and its partner cereal, Rice Honeys, started out as Ranger Joe Wheat Honnies and Ranger Joe Rice Honnies in 1939. The National Biscuit Company (later known as Nabisco) bought the Ranger Joe cereals in 1954 and changed their names to Wheat Honeys and Rice Honeys.

In the late 1960's, sales of the Honeys cereals began to sag. In 1971, in an attempt to revive the cereals, the names were changed again, this time to Winnie-The-Pooh Great Honey Crunchers, which came in both wheat and rice varieties. Despite a barrage of marketing centered around the Winnie-The-Pooh character, the cereals' sales continued to disappoint.

Nabisco gave the cereals one last shot. About a year after the Pooh incarnations were introduced, the cereals changed names for the last time, this time to Klondike Pete's Crunchy Nuggets, rice and wheat.

In 1975, Klondike Pete's Crunchy Nuggets were discontinued and the cereals that had existed under one name or another for 36 years were finally gone. 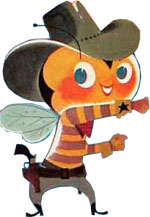 In TV ads, he was known to knock on your televisions screen and say, in a high-pitch Texas drawl, "I'm Buffalo Bee. Take my advice. Get Nabisco Wheat Honey's. Also Rice."

Buffalo Bee was replaced by a less-tough bee named Buddy Bee around 1965.

Wheat Honeys License Plates Ad
Additional Images
These are the most recent images. Click here to see all pictures for Wheat Honeys. 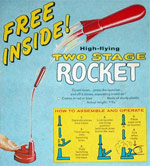 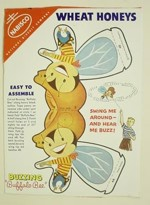 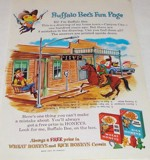 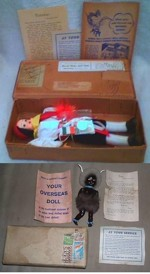 
Upload an image for this cereal
Comments About This Cereal
What do you think of Wheat Honeys?

My very favorite cereal of my entire childhood! Large toasty puffs of wheat with a crunchy glaze of just-right sweetness! The dinosaurs and sea creature toys are the ones I remember most... they were really great and high quality toys and they made opening each new box really fun and exciting! No other sweetened puffed wheat cereal has ever come close to these!

I have fond memories of eating both cereals. I liked the Rice Honeys a little better than the Wheat Honeys, but I ate them both. I collected the dinosaurs & baseball figures.

Around 1958, you could assemble two separate baseball teams (if you ate enough cereal). Each box of Wheat or Rice Honeys would contain a "free" figure of a baseball player. All were posed differently to represent each position on the field. There was a blue team and a yellow team. Got 'em all!

Wheat Honeys was my first cereal I remember as a kid, and the best one I have ever eaten. The toys you got in the box were great. Sugar Smacks is the closest I have found to my Wheat Honeys, but doesn't quite make it. I wish it could be brought back. Sincerely a 55 year old, who wants the OLD times back again.

My all-time favorite cereal and the dinosaurs were my favorite toy. Bring them back both!

Wheat Honeys, and to a lesser degree Rice Honeys, were the dark and sultry cousins of Sugar Smacks. They were syrupy and sticky and just amazingly good!