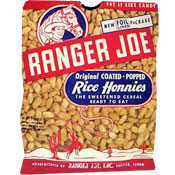 From: Nabisco
Introduced in 1939


This cereal and its partner cereal Ranger Joe Wheat Honnies were the invention of Jim Rex, a heating-equipment salesman from Philadelphia.

Rex developed a method of flash-baking cereal with honey and corn syrup which gave the cereal pieces a sort of candy-coating. Within 10 years of this cereal's introduction, the major cereal companies began using variations of Rex's flash-bake process. Sugar Crisp introduced by Post in 1949 was the first sugar-coated cereal from a major cereal producer.

Both Ranger Joe cereals were sold to the National Biscuit Company (later known as Nabisco) in 1954 where they were renamed Rice Honeys and Wheat Honeys.

In the late 1960's, sales of the Honeys cereals began to sag. In 1971, in an attempt to revive the cereals, the names were changed again, this time to Winnie-The-Pooh Great Honey Crunchers, which came in both rice and wheat varieties. Despite a barrage of marketing centered around the Winnie-The-Pooh character, the cereals' sales continued to disappoint.

Nabisco give the cereals one last shot. About a year after the Pooh incarnations were introduced, the cereal changed names for the last time, this time to Klondike Pete's Crunchy Nuggets, rice and wheat.

Upload an image for this cereal
Comments About This Cereal
What do you think of Ranger Joe Rice Honnies?

Though I could be wrong, my memory is that Ranger Joe cereal came with a little plastic airplane in every box/bag (I recall both types of packaging). That was a MAJOR incentive to a little boy in Philadelphia!

I also thought this cereal came in a clear plastic bag - right or wrong?