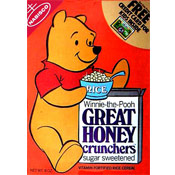 
Before he had his own cereal, Winnie The Pooh was a psudo-member of the Nabisco cereal family. In 1966, he appeared as a Nabisco Puppet - a molded container filled with Puppets Caramel-Flavored Wheat Puffs cereal.

In 1968, the famous bear was a prize in boxes of Nabisco's Rice Honeys and Wheat Honeys cereals. As part of a promotion for Disney's 1968 short film, Winnie The Pooh And The Blustery Day, Pooh and his animated co-stars showed up as "Breakfast Buddies" - small plastic figurines that could be attached to the end of a spoon or the edge of cereal bowl.

A couple years later, Winnie The Pooh would take down the cereals that made him a "breakfast buddy" to millions of kids.

In 1969, Rice Honeys and Wheat Honeys announced they has a new "Golden Honey-Flavored Glaze". Two years later, the original cereals had disappeared and Winnie-The-Pooh Great Honey Crunchers hit the shelves. Like the Honeys cereals, the new cereal came in both rice and wheat varieties. By most accounts, Winnie-The-Pooh Great Honey Crunchers were indistinguishable from the cereals that were so good to the bear just years before.

Winnie The Pooh was the star of another cereal... Winnie The Pooh Hunny Munch (introduced in 1966). The Quaker Oats Company had the exclusive license to use Pooh on cereals in Canada. They promoted Hunny Munch on the box as "the honey sweet cereal treat... for you to munch!"

Hunny B's were a honey grahams cereal with pieces shaped like the letter "B", bumblebees, honey pots and Pooh himself. The cereal would later add "cookie-pieces" shaped like Pooh's friends "Eeyore" and Piglet. Hunny B's began disappearing from store shelves around 2006.


The inconsistency in the hyphenation of "Winnie-The-Pooh" stems from a decision by Disney to simplify Pooh's name to fit promotional material for their short films of the 60's. Prior to the films, Pooh's name usually appeared with hyphens. 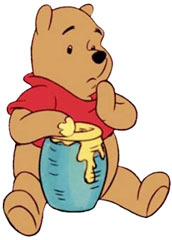 Winnie The Pooh was the creation of A. A. Milne, a successful English playwright in the 1920's. Milne's most famous character first appeared in print in 1925 as part of a Christmas story in the London Evening News.

That story then became the first chapter of Milne's book Winnie-The-Pooh one year later. The book was illustrated by E.H. Shepard who went on to create memorable illustrations for the book Wind In The Willows in 1931. 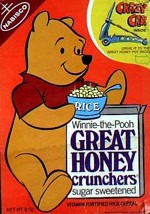 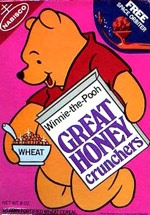 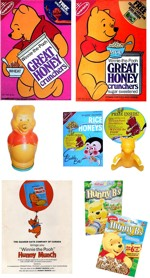 Submitter: Mr Breakfast
Uploaded: 3/14/2008
Additional details
Upload an image for this cereal
Comments About This Cereal
What do you think of Winnie-The-Pooh Great Honey Crunchers?

After almost 50 years I still look for it every time I walk down the cereal aisle. Bring it back!

Yeah! I would love me some more of this stuff. Bring it back already!

Only the best cereal ever. I was so sad when it was gone! :(

This was the best cereal ever made. It was far superior to Sugar/Honey/Nothing Smacks or Sugar/Golden Crisp, for example. Bring it back, Nabisco!

My daughter would love this. She just started reading and LOVES Winnie The Pooh. I take it that it's discontinued, but please let me know if it's still available anywhere, please.

While the wheat variety was great, I think the rice version was out of this world. Some of my fondest breakfast cereal memories come from these two cereals.

My bff and I are in love with this cereal. We want to find it!! WHERE CAN WE FIND IT?? It's the best!