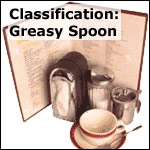 CLOSED DOWN!!! NO LONGER IN BUSINESS

We woke up late one Saturday morning and rather than wait 45 minutes for a seating at Goldy's we decided to try Donnie Mac's, which promotes its food as "trailer-park cuisine" and has recently started serving breakfast on weekends from 8am-12pm. Boy are we glad we decided to give it a try. Terrific service, friendly, informative, but not too chatty -kept a steady refill of their coffee, huge mugs with real cream and splenda. Breakfast offerings were comprehensive spanning from oatmeal pancakes or sweet potato pancakes with real maple syrup to three egg omelets with a choice of four different cheeses, lots of meat selections and veggies. I tried a breakfast sandwich: home made biscuit with a scrambled egg, cheese and bacon along with hash browns. My better half had an omelet. The eggs were tasty, the bacon servings crisp and generous and the hash browns, which can more often than not, be limp and wormy, were crispy warm and the best we have tasted in Boise.

We are thrilled that there is yet another awesome breakfast place in Boise -on par with Goldy's and a bit cheaper as well. Also -hoof it down there while you can -the hostess told us that management was trying out the breakfast idea and we were the only ones there at 8:00 am on Saturday-let's try and convince management to make Donnie Macs breakfast a permanent offering -I'm afraid if more people don't try this out, they'll stop. So instead of waiting in line at Goldy's, give this place a try, I am positive that you will not be disappointed.

Reviews submitted here are meant to pertain to breakfast only. While Mr Breakfast cannot vouch for the validity of each restaurant review, he feels pretty good vouching for the excellent character of the residents of Boise, Idaho - who are primarily responsible for the review(s) you see above for Donnie Macs.