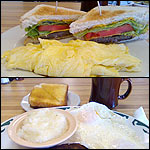 Wow! I happened to be passing by and saw their sign. Out of curiosity I went in and I am glad I did. Now I plan to be a regular.

This restaurant was bought by new owners in April 2013 and is now named The Corner Cafe. The food is the same southern breakfast and lunch as before. Their hours are Monday thru Friday from 7:30am to 2:00pm. Saturday, they are open 7:30am to noon for breakfast only.

In town visiting from Atlanta, saw the reviews on here decided to give it a try, friendly home town feel atmosphere, would do again! Bill was very clean I watched him clean the cook area often. Would recommend this place!

Hard to choose between "best breakfast" and "best bargain." They both apply to this gem of a breakfast restaurant. The young man who mans the grill is a virtuoso and effortlessly puts out a great breakfast. Huge portions. I've not had a better breakfast in Chattanooga.

Check out this 12-egg omelet-to-go from Christie's Corner Cafe in Chattanooga, Tennessee. Submitted by Wing Man! 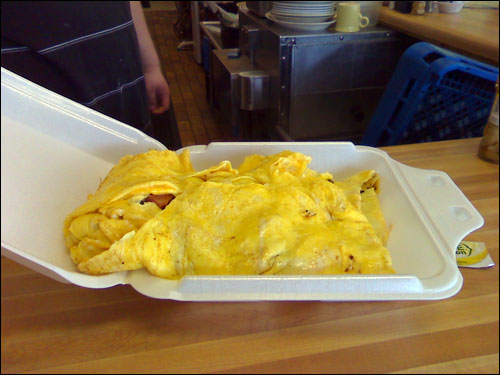 Here's a couple photos of breakfasts at Christie Corner Cafe courtesy of a breakfast lover named "Jay P". Thanks Jay! 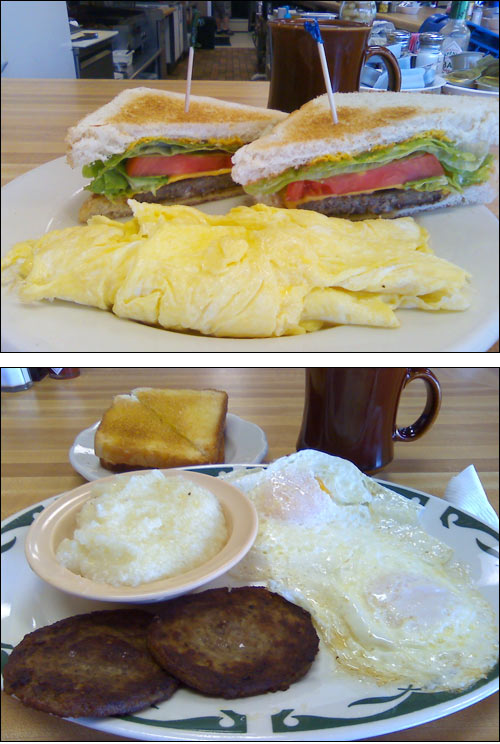 This has to be the best breakfast spot in town! I recently tried the big jake...Well all 4 of us did! To tell the truth,It was VERY LARGE but had such great flavors!The Homemade biscuits are just wonderful,HOmemade gravy(made the right way!).!

They all hve a chance to win free Breakfast or lunch everytime you go in and eat! It's a great deal! Anything from the menu,(Ask for any thing off the Jake Menu not listed! haha),You'll just be in for a treat!

Had the Western Omelet. Looked like a large yellow burrito. Thin egg covering due to flat grill cooking style was perfect. Very thin but strong enough to hold all the chopped ham and vegetables together with no problem. Great flavor. Perfect balance between egg and content of omelet. We had 2 meals with biscuits (2 each), a side and drink for under $14.

Yes, they serve traditional American breakfasts with eggs any style, omelets, bacon, sausage, ham, hash browns, home fries, grits, pancakes, and good old Southern grits. Yet the doors quizzically open at 11:00 a.m., a taxing wait for those of us who like to eat at dawn.

Particularly noteworthy are their old-fashioned omelets, skillfully prepared before your eyes on a flat grill instead of a pan. They virtually cover the surface of an oval platter and are worth the wait.

Ask for The Big Jake Omelet, but be prepared to share. Unless you have a colossal appetite, it contains everything but the kitchen sink and can feed two people.

They serve homemade biscuits if Christie feels like making them. If not, you'll eat toast! Another quirk, but such idiosyncrasies lend character to a restaurant.

And here's another one. Call ahead to make sure they're open. Christie's is family operated, so if someone has a doctor's appointment, they're closed!

Reviews submitted here are meant to pertain to breakfast only. While Mr Breakfast cannot vouch for the validity of each restaurant review, he feels pretty good vouching for the excellent character of the residents of Chattanooga, Tennessee - who are primarily responsible for the review(s) you see above for The Corner Cafe.