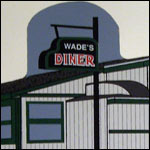 This is the best diner in the world! I'm a frequent traveler and have never felt an atmosphere quite like it. It's fun and so personable. Great food and a show all in one little place. Definatlely a top on my list!

The raisin bread french toast was my dream-come-true on a plate and the omelet was pretty good too. I will be going back for sure next time I'm in Oswego and ready to try those amazing looking pancakes.

If your ever in Oswego, NY and you love the personal feel of a hometown diner, Wades is a must. This landmark diner is breakfast and entertainment all in one. The omelets are made with such skill and perfection and all the bread is homemade. Famous for their raisin bread. So hard to believe the waitresses do it all by memory. It's an awesome experience and they make you feel so welcome.

A few years ago we were touring back across country from the Maritimes to Alberta. We took a brief run through New York State to avoid the hassles of the Toronto area traffic. We found ourselves in Oswego NY for our first fuel stop of the morning and also needed to fuel the riders. I asked the fellow at the gas station where we could find a good breakfast. His reply was a question, "Do you want, atmosphere or are you looking for good food?" We chose good food and he directed us to Wades Diner a few blocks back and just off the main road, which he advised us "don't look like much, its kind of a zoo there but they have the best french toast in New York State".

Well, it had atmosphere too, of a sort that is. The decor looked like it was straight out of the early seventies, and had likely been the same since the day they opened. It was clean, but dingy and aged. There was not a table to be had, so we waited for around ten minutes or so to get an empty booth. There was one gal serving the entire place, she kind of reminded us of Flo from the TV show. She was good, she never let a cup run dry in that place, and it was continually packed. She was quick, friendly and had probably been working there since the decor was new, in fact she kind of fit right in with it. The food was as good as the service, and the french toast lived up to the billing. They baked their own raisin bread on the premisis, and that was what they made the french toast from. It was probably the most memorable dining experience of our four weeks on the road.

Yesterday, before flying home from Syracuse to California, my wife and I drove up to Oswego, NY to have breakfast at Wade's Diner. We lived in Oswego for 15 months back in 1978-1979 and remembered standing in line, outside in the snow, for what seemed to be very long periods, just to enjoy one of their old-fashioned greasy breakfasts, especially the grilled cinnamon bread. The place hasn't changed; it's still a charming dump - a friendly blue-collar kind of place. I think it has the same wallpaper and the short-order cook, John, is still there. He has slowed down a bit, as he has aged, but I remember watching him years ago thinking that I couldn't do what he does. His skill in maneuvering all those food orders, by himself, was like watching a good boxer - good footwork, good hands, and very quick. While we got in relatively easily this day, we waited an hour for the bacon cheese omelet while the line formed outside. One of the waitresses looked familiar as well and, yes she has been there for over 25 years. Everyone was relaxed, the locals and the students from SUNY following the routine of the place without frustration. They don't do checks at Wade's; the waitresses remember your order and you pay what they tell you. The prices are cheap and it's a good practice to tip well; but I always wondered about how they handled their tax returns.

Oswego is a small provincial town on Lake Ontario about half way between Rochester and Watertown, places like Buffalo that get "lake effect" snow during their long winters. I remember getting 36 inches one weekend; driving in the occasional white-out is an experience not to be enjoyed. We moved from Oswego due to a company transfer, and while we liked living there, one doesn't turn down a company transfer from Oswego because the offer may never come again! Going back, just for breakfast at an old familiar haunt, was a nice nostalgic moment.

Sure was very impressed with the show at this little old place. such a finely tuned system. sure cant beat the breakfast,no need for lunch.will definatly return everytime i can,was well worth the wait.

If you want a good all around breakfast, then Wade's Diner is the place to go. You will especially like their homemade raisin bread, their oversize pancakes and the best omelets in Oswego.

Wade's is hands down the best ham and cheese omelette I've ever had!! Everyone has their own favorites at this place which speaks to how good everything is. Don't get me wrong or get shocked - this place is the definition of a greasy spoon dive but damn if it doesn't taste so GOOD!! Only serve breakfast and only open from 6a to noon - they do one thing and do it very well!!

Wades diner has been serving breakfast for over 50 years in the same location. Having lived in Oswego all my life I have enjoyed their breakfast at least twice a week for over 30 years. The homemade raisin bread is the very best and their omelets are better than any I have ever had anywhere else. I suggest their 2- egg- ham & Cheese omelet w/Their delicious raisin bread.

I went to school in Oswego back in the 80's The omelets are the best of any diner I have ever eaten at. The Raisin bread is made fresh daily and is the best. To go to Oswego and not have breakfast is like going to Vegas and not go to a Casino.

The best bacon & cheese omlette in the world!

Listen to me. If you really like omelets, homefries, home-made toast and diners with a lot of character find an excuse to go to Oswego and have breakfast at Wades. I live three hundred miles away and go there at least twice a year...just for breakfast! I usually stay overnight (for two breakfasts) but once went up and back in the same day and it was worth every mile.

John, the cook for over 30 years, uses lots of oil on the grill, covers every square inch of egg with cheese then folds (not neatly) and moves the omelet to the back of the grill to cook slowly. This really melts the cheese and gives the bottom of the omelet a very unique, smooth texture I haven't found anywhere else. The cheese literally oozes out when you take that first bite. Homefries are cooked on the grill with lots of oil and the fresh (made every morning) homemade cinnamon-raisin bread, heavily buttered, is legendary.

It's a heart attack on a plate but you gotta go from something.

This is my favorite place to eat breakfast at. I recommend the "Garbage omelet". They also have pancakes that are bigger than my head. Take home some fresh homemade raisin bread after you dine.

I went to college at Oswego from 1980-84. Wade's was a regular early morning breakfast stop after being out all night. The slabs of raisin toast, the 3-egg omelets, the homefries were all great! I'm glad it's still open - I haven't been there in over 20 years.

The cheese - or cheese and onion (my personal favorite)- omelet has a quality I've never tasted anywhere else. As if it rises above the usual egg taste. The homefries and already-mentioned raisin toast also meld with the creamy cheese omelet to elevate the experience to "awesome." I went to school there through 1981, then went back in 2004 and it was the same food, same short-order cook, same raisin toast . Guess you don't tinker with perfection.

We're driving to my son's hockey tournament in Canada this month and going 2 hrs out of our way just for breakfast at Wade's. Need I say more?

I went to SUNY @ Oswego for 4 years (Class of 1983) and the best memories was the Sat morning breakfast at Wades. Standing in line in the freezing cold for sometiems 1 hour to get a seat in the warm great smalling diner. I will never forget the 2 egg omlet, home fries, coffee and the 2 slises of homemade rasin bread toast!! My Oswego experiece comes in a close second to Wades..I will never forget it!!!

Reviews submitted here are meant to pertain to breakfast only. While Mr Breakfast cannot vouch for the validity of each restaurant review, he feels pretty good vouching for the excellent character of the residents of Oswego, New York - who are primarily responsible for the review(s) you see above for Wade's Diner.