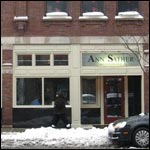 Best cinnamon buns in the world! I haven't had anything else, but who cares!

Great restaurant! I have been to all of the locations. I highly recommend.

Make sure to get the cinnamon roll as this is what they are known for.

hi how are you

This always crowded restaurant has the best cinnamon buns anywhere. In addition, it's swedish pancakes with ligonberries is the best to be found in the Chitown area. Great place to take out-of-towners for a real treat.

I go here all the time. The cinnamon rolls simply can't be beat, I also love the eggs benedict, pecan french toast, and swedish pancakes. Service is normally nice and fast, and you're guaranteed to get stuffed on the large portions. It's a great place to take guests.

I've eaten at Ann Sather's 3 times and it just kept getting worse. I don't know why people rave about this place. There are so many better places to eat breakfast. The food is just horrible. It comes out cold and just isn't good. They have good cinnamon rolls...big deal. That's not enough for me to want to go there. I've had better cinnamon rolls from a can. I'm just not a fan of this place.

Been a Chicago mainstay for decades now, and with a very mixed straight/gay clientele. Fun atmosphere, the best sticky cinnamon buns in the world, and everything else is a-ok! Check it out...you won't be disappointed.

Reviews submitted here are meant to pertain to breakfast only. While Mr Breakfast cannot vouch for the validity of each restaurant review, he feels pretty good vouching for the excellent character of the residents of Chicago, Illinois - who are primarily responsible for the review(s) you see above for Ann Sather's.