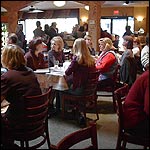 My sister introduced us to Crackers & Co. over the holidays, swearing that they served the best French toast ever. All four of us tried the cinnamon swirl French toast, and three of us indulged in the 'Day Break,' featuring two farm fresh eggs any style, two slices of bacon and two slices of said toast ($7.49). It was a decadent affair. The French toast was delightfully fluffy and thick, the cinnamon did not overpower the batter or bread, and a delicate vanilla fragrance permeated the dish. I tried the scrambled eggs and they were rich, flavorful, and bright yellow. The bacon was a tad too crisp for my taste, but was a nice counterpoint to the sweet toast. I will definitely go back next time I visit my folks!

Awesome... The pork carnitas breakfast burrito is the best burrito I've ever had. The pork just melts in your mouth. The fried potatoes are delicious too. My husband and I have decided to become regulars!

BEST BREAKFAST I'VE HAD BY FAR. WOULD RECOMEND IT TO ANYBODY. THE CARNITAS BURRITO WAS HUDGE AND I COULDNT FINISH IT.

I discovered this hide-a-way during a business meeting. I would have never known that such a great restaurant with such wonderful and delicious food existed in the valley! Now it is the SPOT and a must stop for all my visitors, family and friends. I visit this cozy lil cafe at least 2 to 3 times a month. I would go more often if I lived closer! The chicken tortilla soup is to die for, same goes for breakfast potatoes. YUM!!!!!!!

Waiter we had today was awesome. Nice place, great breakfast. Most of us had the The Spicy Mexican Skillet. The tortilla they serve with it is huge and very good. One of us had the blueberry waffle and it was great and served with fresh blueberries, not pie filling like some places would do. Another of our group had the Three Musketeer Omelette. So good and big she couldn't finish it. One had the pink grapefruit juice and swore it was freshed squeezed. All over this is definitely a place we will be returning to.

I have been to this restaurant 10+ times, and have never been disappointed!!! Ask for Eddie G., a very personable and efficient server. The place is decorated in old-world style, the atmosphere is upbeat and fun, and the food is tremendous! The breakfast potatoes are fantastic, the Onassis Omelet is fantastic---I can't say enough about this wonderful eatery!!!

Atmosphere is really nice, and peacefull. French toast was best I've ever had and they did the eggs exactly how I wanted.
I gave them a "good" for the coffee rather than an "awesome" because there was not real cream on the table, and AZ issue....other than that, great place!

Love the food everytime we have visited!
Deserts are out of this world! Try the Coconut Lemon cake - so good! French toast is great! Try them for lunch too - you won't be disappointed!
New location on Greenfield & Brown is awesome - now we don't have to drive all the way to the original location!

great french toast, friendly staff, from the time i came in to the time i left.

The best breakfast in Mesa!!!
The biscuits and gravy were to die for!!!
The eggs were perfect!
The pancakes were extra yummy according to my daughter.
The potatoes were scruptious!
The cinnamon swirl french was absolutely wonderful! Homemade sausage!!!
Average priced range and huge portions!
We have been searching for a good breakfast place in Mesa for years and the atmosphere, service and food were the best we have seen in the 4 states we have lived in. We had dessert after breakfast and we had to take some bread pudding to all of our relatives it was that good! They are opening up a second location at greenfield and brown.

Hard to find but worth the effort. Homemade pastries, super salads, mom's soups. I take fiends of a one of a kind experience, cozy decor. Good think I don't live closer, I'd eat here at least once a week. No one is ever disappionted in the food or service.

Superior food but location is a bit difficult to find. It is located in a industrial Park and not on a main street. Worth looking for! The homemade breakfast potatoes are the best ever!

Crackers and Co is a World Class breakfast outfit. The service is prompt and friendly. The menu is HUGE. You will enjoy lots and lots of choices here.

The Onassis omelet is superb. It features grilled chicken, feta cheese, tomatoes, and olives. The Onassis is a favorite of mine and destined to be one of yours too.

A specialty of the house is the Cinnamon Swirl French toast. Oh my, this is heaven on earth. Simply the best!

The omelettes are really big here. Friendly waitresses (I didn't see any waiters). The owner makes a killer bread pudding which is sold in a fancy supermarket in the area as well.

Reviews submitted here are meant to pertain to breakfast only. While Mr Breakfast cannot vouch for the validity of each restaurant review, he feels pretty good vouching for the excellent character of the residents of Mesa, Arizona - who are primarily responsible for the review(s) you see above for Crackers & Co.