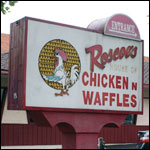 The chicken and waffles are good. But I really like their homestyle breakfast special with the grits and waffles. I wish more places in Southern California served grits.

I was introduced to Roscoes back in 1982 where the first one was on Washington near La Brea. I didn't care much for waffles until I tryed Roscoes. I was soooo surprised how good the waffles were my friends and I were going every week on lunch time. I have been to all the locations and continue to tell people about the best waffles around. Love it. Just try it once and you will like it. I go to the Pasadena location. I live closest to that Roscoes.

The chicken N Waffles are incredible do be put off by the very out dated decor the food makes up for it.Food is incredible and i will be recommending to anyone and everyone and returning as many times as i can during my stay in L.A.

I just walked into Roscoe's and could not eat there. I don't know who told Californians that chicken and waffles are southern because they are not. It comes from Harlem as far back as anyone can trace and therefore is not soul food. However they try to combine some generic soul food like greens and macaroni (I'm sure that's the only soul food they know about) with this Northern food. I am from South Carolina and have family all over the south and none of us grew up eating this. Yeah it's authentic soul food like the California roll is authentic Japanese food. Can't believe they pulled this scam off and made people believe it.

Tell your friend down in Texas that he doesn't know what he is talking about. Chicken N' Waffles originated in the deep South....and a Texan wouldn't know that because Texas really isn't part of the South...it's cow town country. Texas is it's own country practically and the black population is not like it is in Alabama and Louisiana (where this meal combo comes from).

Back to Roscoe's, it is the best damn waffle meal you will ever have. And if you're all upity and get your panties in a bunch easily because there isn't someone waiting on you hand and foot, well then, don't go to Roscoe's. It's about the food here, not the service.

I grew up in the L.A. area hearing about Roscoe's and finally had the opportunity to sample their fare when one of my Airport Police buds (a cop should know about good food, right?) met me for lunch at the Manchester/Broadway (or Main) location (thanks, Tony Jay, for the worst breakfast ever!). I have to say I have NO IDEA what all the hype is about! The food was a mere average at best. And the service? PLEEEASE! WHAT service?? My kids make a much tastier breakfast! Good breakfast/service can be found at Marston's in Pasadena or the Original Pancake House in Redondo Beach - or for that matter, Denny's in El Segundo (Hey Jose!).

I just want to say that when I was still living in Calif. I went to Roscoe's and I will tell you something...The food is AWSOME! but the service at your Pasadena rest. SUCKS! We felt really uncomfortable, because it was all black people, and we were the only Mexican-American people there. They didn't take care of us like in any other establishment. My waitress treated us like crap! Now on the other Hand when we went to the rest. in Hollywood they treated us very good. Chicken and Waffles what a great combination!
I moved to Texas ...and I mention Chicken and Waffles to one of my co-workers ( an African-American male) and he said that "Chicken and Waffles are not from the SOUTH!" He had never heard of Chicken and Waffles. But he said he is going to make some when he get home just to see what it taste like.

BEST CHICKEN IN THE WORLD AND WAFFLES TOO,BEST SERVICE I EVER HAD, AND I AM A REGULAR AT ROSCOES I LIKE IT SOOO MUCH THAT I AM ON THE NEXT PLANE TO LOS ANGELES FROM MONTREAL CANADA
AND SPECIAL THANKS TO ALL THE PERSONELL AT ROSCOES AND LAST BUT NOT LEAST TO ANTHONY (HORMIGA)FROM YOUR HOME BOY RONALD AND EDUARDO MEJIA

This is the spot... They always got the cuts playing in the background.. whether you eat at the one in Hollywood or Long Beach, the food tastes as if it was cooked by the same foool.. it's awesome.. best waffles I've ever tasted and the chicken is always moist... Put that hot sauce on the chicken and don't forget the cornbread either... dope ambiance and everything.. makes you just wanna stay for good or come back again and again.. all in all.. it's all to the good.

Luckly I had families in California which gave me a chance to go to Roscoe's. Great waffle with chicken and gravy. I would love it if Roscoe's business move to Florida. With all the tourist we got there, I promise it will have a great business settling here. Especially in a place like Orlando or Miami.

They are good and worth the price.

I'm from the south (Alabama, Virginia) and have had some great waffles and some stupendous chicken! So on this subject I "knows" of what I speak! Roscoes is right up there with the best of them. The chicken is down home good, and waffles - delicious. Also the service is great. Don't let Big Mama catch you with your elbows on the table, though, you might get scolded.

I WAS THERE IN 1997,WHEN TUPUC DIED (CALLI)WE WENT TO ROSCO'S THE FOOD WAS SO GOOD,I WOULD ONLY COME TO CALL1 TO GET ROSCO'S I LOVE CHICKEN AND I LOVE ROSCO'S I WANT TO OPEN A ROSCO'S IN ST THOMAS USVI . IAM FROM NEW YORK WE HAVE SOME GOOD RESTURANTS I WAS RAISE IN SOUTH CAROLINA THEY HAVE GOOD RESTRANTS TOO IAM HERE IN ST THOMAS AN I YEARN FOR RESTURANT BREAKFASTS YOU KNOW WITH GRITS AN THING HELP ME OUT

Every place has their off days and I assume that was the case with the negative reviews. Either that or the old saying "you can't please everyone" applies here. Enough of that though, I've been going to Roscoe's for years and have yet to have a bad meal or bad service. I've converted many a person who would tend to turn their nose up at the idea of chicken and waffles. Since it's not REQUIRED that you get a meal with both chicken and waffles is usually enough to get someone in the door. Once there they discover the joy that is Roscoe's. The flavor or the waffels is unique and very tasty as is the syrup. The chicken (especially with their gravy) is tender and moist. This is a great place to eat for breakfast, lunch, or dinner.

I LOVE THIS PLACE I CAN HAVE ONE OF THESE PLACE'S AS MY NIEGHBOR.FIRST I HAVE TO ADMIT CHICKENS AND WAFFLES I THOUGHT KNOW WAY I WAS GOING TO EAT THIS TOGETHER BUT AFTER I TASTED THE WAFFLE THEN THE CHICKEN I FELT LIKE I WAS IN HEAVEN. THEN I STARTED TO EAT OFF MY MOMS PLATE. GO THERE AND EAT SOME GOOD CHICKEN AND WAFFLES AND ENJOY IT MMMMMMMMM.... MMMMMMMMM.... GOOD

they have the best waffles you will ever taste. make sureyou have more than one waffle mmmmmmmm good

The food was great. try the #2 and put the chicken and gravy on the waffles and syrup. Sweet and salty goodness.

I would just like to say that I wish we could get a Roscoe's up here in Canada cause it was awesome chicken and the best waffles ive ever had in my life!! Simply cannot be topped!! and the proportions? HUGE!! Order with your head not your stomach! I had the 1/2 chicken and waffles with gravy, oh man thats alotta food man! I wish I could move next door but being canadian and all kinda hurts that chance i guess. Move one up here SCOE!! Do not pass up the chance to go visit these fine peeps! You guys hiring canadians? I Can bring some bacon! heh heh.
Roscoe for Prime Minister!!

I would like to say that Rosco's has brought a new light to the restaurant industry. I am from Southern Alabama and all there is around here is Bar-b-Q, I would be interested in being a financial backer if y'all came down here. I have a 36' mobile to use as collateral. Thanks again. Mack

The food was fine...the service was the worst I have encountered in many years. Would not recommend this restaurant to friend or foe.

Very good. The waffles are sooooo soft and fluffy. The syrup is great because it has a very unique tatse. Better then KFC. Great service. This resturant is known all throughout the west coast but only has stores in L.A. Worth eating.

I live in Lancaster, Palmdale, California Area.
We need a Roscoe's Chicken & Waffles up here.

When are you coming.

I didnt like the Waffles and the chicken tasted like crap and the syrup well it was horrible , i think them cheap @$#%&!# should go out of buisness and rip it down and buid a KFC

I've been passing by the restaurant for years. My advice is not to pass.
The staff was super friendly and the food was scrumptious. We got refills for coffee and lemonade without even asking. My daughter and I had fried chicken wings, smothered potatoes, macaroni & cheese, greens and a waffle. We got two dinners and just split them so we could try everything.
Waffles for dinner are great!

The chickens taste about the same as KFC's. The waffles were not as good as claimed to be. Overall, passable.

The waffles were very tasty... the chicken had nice flavor but was a little dry. The customer service was excellant! I would definatly go back and would highly recommend you try Roscoe's.

The one thing I loved about traveling in the south was the FOOD! Soul Food, meat and three...Roscoe's in L.A. brings all those happy eating memories back. A fried chicken connisseur will immediately recognize that your chicken is made to order. The spices kick the colonel's in the butt! I love sweet with savory so the combination of syrup laden waffles with chicken was perfect. Of course, you also have the fantastic greens and mac and cheese to choose from for those special days when you want to throw caution and your waist line to the wind. The service is great.

Want some waffles to start your day? These waffles come with syrup that'll send you to the gym for a month just to work it off. With a healthy supply of breakfast items, you can go back everyday for a month and get something different. And don't forget about the "Big Momma Special"!

Reviews submitted here are meant to pertain to breakfast only. While Mr Breakfast cannot vouch for the validity of each restaurant review, he feels pretty good vouching for the excellent character of the residents of Pasadena, California - who are primarily responsible for the review(s) you see above for Roscoe's House Of Chicken N' Waffles.