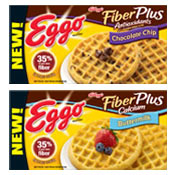 The one to try is the Chocolate Chip variety.

While good, the Buttermilk waffle tastes similar to a multitude of other frozen waffles on the market. The 9 grams of dietary fiber per two waffle serving should be a selling point for some (similar products often contain less than 1 gram), but you shouldn't expect anything new or interesting as far as flavor.

On the other hand, the Chocolate Chip waffles offer the same 9 grams of fiber, but with delightful specks of chocolate in every bite. This variety has 5 more grams of sugar than it's Buttermilk brother, but the chocolate adds both flavor and sweetness. If you're inclined to have maple syrup on your waffles, you'll probably - or at least you should - use a little less syrup so the chocolate flavor can shine through.

I topped my Chocolate Chip waffles with a little butter substitute and a very light drizzle of pure maple syrup. Very tasty.

For the best results, follow the package instructions and toast the waffles on your toaster's lowest setting - twice. Both kinds of waffles toasted up crisp on the outside and tender on the inside.

Fun flavor and fiber... give this one a try.

The rating for this product is based solely on the Chocolate Chip variety. The Buttermilk version would have scored average on all counts.


Comments About This Product Review
What do you think of Eggo FiberPlus Waffles?
By Kenny G2

Where can I find them? There's other new kinds of Eggo waffles at out Target, but not the FiberPlus kind.

I'm going to try them tomorrow! :)