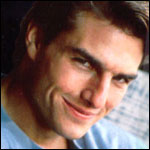 Thomas Cruise Mapother The IV is an American actor and producer. His breakout role was that of Joel Goodson in the 1983 film Risky Business. Below average in height and not particularly handsome, Tom Cruise has defied Hollywood to remain a top box office draw for the last twenty years. In 1989, Cruise received his first Oscar nomination for Best Actor for Born on the Fourth of July. In 1996 he received an Academy Award nomination for Best Actor for Jerry Maguire.