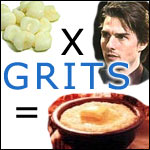 The other night, I was sitting in the hot tub of my apartment building thinking about grits. I had been struggling to understand grits for sometime and that evening was no exception. The difference between hominy grits and corn grits was particularly perplexing.

I gently laid my hand on the surface of the bubbling water and allowed my thoughts to relax with my body. The water supported the weight of my open fingers and my entire arm seemed to float. I extended the other arm into the state of weightlessness. Next went my feet. With every limb now floating and my body in the shape of a limp letter "U", I had an unusual thought. I wondered if Tom Cruise had ever done what I was doing.

Certainly he had a hot tub. Was it possible that Tom Cruise sometimes sat in the hot tub and mused about his hand floating? Had he ever tried to block the jets of air with his toes as I often did? In that moment, Tom Cruise didn't seem so different from me. We were both human - made of the same basic stuff. Most of things I did, he did too. He brushed his teeth. He watched TV. He caught colds. And he might have even enjoyed his own hand floating in the hot tub. We were just two kernels of corn prepared in different ways.

And alas, I had my answer! Tom Cruise is to humanity what grits are to corn. It was so simple, yet so genius. My struggle was at an end.

From corn, there comes kernels of corn. The destiny of each kernel is not predetermined. One kernel might go on to become a popcorn kernel. Another could be ground into cornmeal. Another might even become a "Corn Nut". I became a working stiff breakfast expert. Tom Cruise became a successful movie actor and producer. We were both human, but as you know different corn comes from different cobs -- and cobs come from different crops.

As with humanity, kernels from the same cob have a tendency to share destinies. My family cob happens to have a baldness gene and a penchants for breakfast. And while the men of my cob are manly and appealing to the eye, there are very few kernels on the family cob with inherent looks that match the current Hollywood standard for movie star attractiveness. While we are both "corn", Tom Cruise and I come from very different cobs.

That is not to say I couldn't have become a Hollywood heartthrob. A few cosmetic tricks and a lucky break could have put me on a similar course as the "Mission Impossible" star. And visa versa: a tight shave, a month of over-eating and years of intense study of breakfast could have put Tom Cruise in my shoes. We are inclined to follow the family tree, but not destined to it. In the case of dried corn, a few kernels always fall to the side during loading and are collected later and taken to different possessing plants.

Some kernels, fall out of a truck in transit and land on the pavement. Such a Buddhist ideal: are they lonely and suffering; or is it the beautiful "one true way" that they are the ones who pop from the heat of the sun and are swept away by birds?

As for Tom Cruise as grits, his kernel went to a very special processing plant, one where the rewards of graduating are many, but the schooling is intense and often painful. For all great actors, the training and the actual "acting" are grueling, for they must expose their insides, their emotions. So too is the first step in becoming a grit. The kernel must loose its skin.

To fully understand the many facets of grits, let's make Tom Cruise into hominy grits. Let's also imagine three other actors graduating from a different class in the same processing plant: Television's David Schwimmer as "corn grits", Broadway leading lady Lani Kazan as "cornmeal" and the man who plays Ronald McDonald in television commercials as "bran".

Tom Cruise as potential hominy grits first arrives at the processing plant as a dried kernel of corn. It doesn't matter to the teachers of the plant whether he's white or yellow. They will make grits out of him regardless. Just as an Army General must become "Army" before becoming "Army General", so too must a hominy grit become "hominy" before it receives its stars. To be inducted into that branch of food, a kernel must be soaked in lye water.

By definition, lye is a solution of sodium hydroxide or potassium hydroxide. However, it might be easier to think of lye as a brutal acting teacher or a collection of life lessons. When soaked in lye for an extended period of time, the gifted actor emerges without his skin. His soul is bared to the world; his emotions are exposed for all to see. So too is this true for the kernel of corn, who is scooped from the vat as hominy - his outer shell floating in the water he leaves behind.

For clarity's sake, you must also imagine other actors swimming in the same treacherous waters as Tom Cruise. No kernel emerges as hominy without the company of others. If it helps, picture Meryl Streep, Tommy Lee Jones and Leonardo DiCaprio in the same class or vat.

When the inside of the kernel is removed from the vat as hominy, it has understandably swelled to twice its size. The nature of soaking and absorbing, no one will question that the 1994 "Interview With The Vampire" Tom Cruise became twice the actor he was in 1982's "Losin' It".

At this point, Tom Cruise as potential hominy grits sets his new existence down in front of the heat lamp and dwells on all he's gone through. Something happens when you take time to reflect on your journeys; you regain a part of what you once were. And like Tom Cruise - the actor who never lost sight of his humble origins, the hominy kernel too regains it firmness. Some might say it dries out. But if it is dry, it is only so it can handle what lies ahead.

The profit-greedy assembly line of Hollywood pounds and crushes... and heavy steel rollers grind hominy kernels into the granules known as grits. The grits! Broken kernels. Busted bits of hardship and experience. And so they graduate from the processing plant, a hundred remnants of what they used to be.

Is all hope lost?

In 1996, Tom Cruise received the Golden Globe Award for Best Actor in a Comedy or Musical for his role in the critically acclaimed film "Jerry Maguire".

Milk and water are like film scripts... sometimes milk is sour and sometimes water is dirty. More so now than ever, a good film is hard to find. For Tom Cruise as grits, his milk is always fresh and his water is always clean. When you mix Tom Cruise with a good script, you get the taste of the kernel. When you boil grits with water it comes alive. His pieces mix together and it is clear that the payoff was worth the trials and tribulations.

A good bowl of hominy grits can be amazing, whether it is by itself, with a pat of butter or heavily mixed with cheese. If you put a period top hat on Tom Cruise, he uses that hat to add to his character. If you give him a mustache, he not only derives character from it, he adds character to the mustache. I needn't remind anyone how a single sunny-side-up egg resting on top of grits enhances the personality of breakfast. For my money, you can dress Tom Cruise - the actor - in a ski suit and a large helmet, and I'll still expect to get a flavor of the man.

It is true of all things in life: quality ingredients yield excellent recipes.


THE OTHER CLASS: CORN GRITS

If you'll remember, down the hall from Tom Cruise's hominy grits, a few other actors were taking another class, Corn Grits 101. The classroom structure might seem a tad confusing because hominy is corn. The most important distinction to make is simply that Hominy Grits (Tom Cruise) are made with more care and broken into fewer pieces.

Only white corn kernels are allowed in Corn Grits 101.

In lesson one, everyone takes a steam. This loosens their outer shell. It's a fast track program that takes only minutes, contrasted to hominy's multiple-day soaking. The corn kernels are then ground similarly to hominy and sifted through wire mesh screens to create three different products depending on the size of their granule.

To the largest granule who we envisioned as David Schwimmer, they say "Congratulations you pass corn grits 101. Go dry out." To the second largest, they say, "Get out of here. You are cornmeal (Lani Kazan)." The finest granules are considered bran. Bran is so fine, that it often hides out on grits and cornmeal. Imagine a tiny commercial actor hiding in David Schwimmer's jacket pocket.

Corn grits aren't quite as good as hominy grits, but they are satisfying in their own way. What I like about corn grits is that the original kernels became part of one another. Lani Kazan is mostly cornmeal, but she's also part grits and part bran. Isn't that is the beauty of both humanity and grits... how we have a little of our friends in us.

As I prepare to sink once more into the hot tub, I ask one final question. Are grits the most important corn product? Is Tom Cruise better than you or me? I think yes.

However, I also know this: popcorn and cornmeal are important too, and the day may come when I prefer cornmeal to hominy grits.

There is a wonderful wisdom that comes with age. Old timers tend to become less concerned with national celebrity. To them, their pharmacist or tour guide holds as much importance as any movie star. They would be unable to pick Tom Cruise out of a police line-up. In their eyes, we are all pretty much the same as Tom Cruise. We are all important. We are all Tom Cruise. We are all grits.

Except for Lani Kazan. She's cornmeal.