This company was founded in 1989 by Annie Withey who the company's website refers to as "an organic farmer, wife, and mother of two." Their first product was an all-natural macaroni and cheese product called Shells & White Cheddar. Throughout the 90's, Annie's Homegrown expanded their macaroni and cheese line. By 2005, the company had introduced two cracker products called Cheddar Bunnies and Bunny Grahams.

The rabbit-related names of the cereals are derived from the company's mascot, a rabbit named Bernie who appears in the company's logo with the text "Rabbit of Approval" and "Totally Natural". 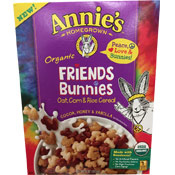