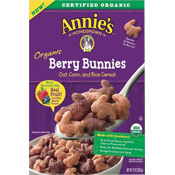 From: Annie's Homegrown
Introduced in 2016


The complete name of this cereal is Organic Berry Bunnies. It's described on the box as an "oat, corn and rice cereal" with the slogan "Bunnies go bonkers for berries!" The cereal pieces are shaped like bunny rabbit bodies. Half of the pieces are a faint pink and strawberry flavored. The other half are vaguely purple and blueberry flavored.

On the front of the inaugural cereal box, a voice bubble is coming from one of the bunny pieces saying, "We're flavored with real fruit and other natural flavors."

This cereal was introduced in February 2016 along with two other new organic cereals: Cocoa Bunnies and Frosted Oat Flakes. All three cereals boast that they are made without artificial flavors, synthetic colors, preservatives or high fructose corn syrup.

Upload an image for this cereal
Comments About This Cereal
What do you think of Berry Bunnies?

These were decent. Not huge on taste, but they weren't horrible either. I'm guessing they didn't have a strong taste since they're supposed to be a healthy cereal for children. It's good to try for a change up, but if you're looking for a strong fruity tasting cereal, look elsewhere.