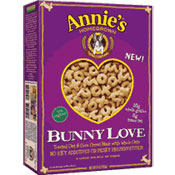 
This cereal was described on the box as a "Toasted Oat & Corn Cereal Made with Whole Oats - No Icky Additives or Pesky Preservative! A Good Source of Fiber." It's flavor was comparable to Cheerios.

The cereal pieces in Bunny Love cereal were shaped like rabbits, X's and O's or as the company's website refers to them "bunnies", hugs" and "kisses".

The name Bunny Love is a nod to the company's mascot, a rabbit named Bernie who appears in the company's logo with the text "Rabbit of Approval" and "Totally Natural".


Click here to see all cereals from Annie's Homegrown.

The rabbit that appears in the logo of Annie's Homegrown cereals is Bernie, a grey and white Dutch rabbit owned by the companies founder Annie Withey. According to the company's website, the rabbit's motto is "Be Hoppy!"

Submitter: Mr Breakfast
Uploaded: 3/5/2009
Additional details
Upload an image for this cereal
Comments About This Cereal
What do you think of Bunny Love?
There are no comments yet for this cereal. Be the first! Was it good? Was it bad?
Do you have information not included in the article? Let the world know!