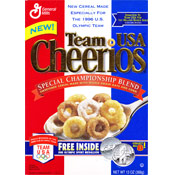 
"New cereal made especially for the 1996 U.S. Olympic Team - Special Champion Blend." This cereal was a limited edition tie-in with the 1996 Summer Olympics in Atlanta, GA.

The box described the cereal like this: "Team USA Cheerios is a new, special-edition blend of frosted oats, golden corn and whole grain oats that has been specially formulated for the 1996 U.S. Olympic Team. For the first million boxes sold... the U.S. Olympic Team will receive a donation which will help pay for the training of our athletes." 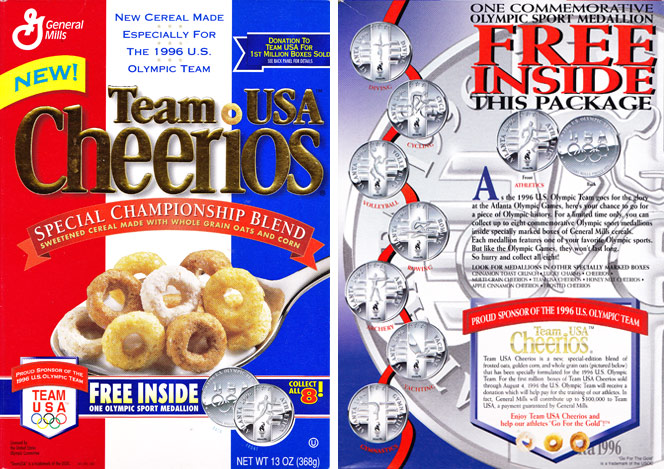 The box we got our hand on had one of eight silver-ish Olympic Sport Medallions inside. It's noted that other General Mills cereals like Cinnamon Toast Crunch and Lucky Charms also offered the medallions at the same time.

In 1997, the name of this cereal was changed to Team Cheerios (minus the USA).

Submitter: susan
Uploaded: 10/31/2008
Additional details
Upload an image for this cereal
Comments About This Cereal
What do you think of Team USA Cheerios?

Team Cheerios mixed original, multi grain, and frosted brands. If you want it back simply buy those three boxes and mix them up yourself.

This stuff was the best cereal ever made. I haven't eaten cereal in years, but every time I walk through the grocery store I still look for this one.

I would have liked to have seen this back for the Winter Olympics this year. I liked it a lot.

Still no Team Cheerios? What the heck man, this was the best cereal ever. I too have tried to reproduce my own to no avail. Please, please bring it back.

I agree. Please bring back Team Cheerios. They were the best!

Bring back the Team Cheerios please. It was great.

I absolutely loved this cereal! Some golden, some frosted plus multi-grain. Yum. I've even tried to make my own but the ratio wasn't right. Please bring this great cereal back!

I have to agree! Team Cheerios was not only a great cereal, but a great dedication to the USA. BRING IT BACK!

I was heartbroken when I couldn't find them anymore, as if a part of me no longer existed. What cereal do you have that is the same. I have tried the multigrain and they are different.