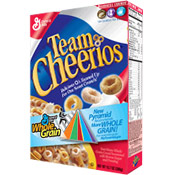 
This cereal was originally called Team USA Cheerios when it was introduced in 1996 as a limited edition tie-in with the 1996 Summer Olympics in Atlanta, GA. The name was changed in 1997 and the cereal was relaunched.

"3 delicious O's teamed up for one sweet crunch!

"Nutritious whole grain cereal sweetened with brown sugar and frosting. Team Cheerios, three delicious O's that pack a sweet crunch. Pour yourself a bowl, dig in, and score great taste in every bite!"

In May of 1997, a promotion took place where a helicopter dropped hundreds of boxes of Team Cheerios into a giant bowl in a football stadium in Lewisville, Texas. 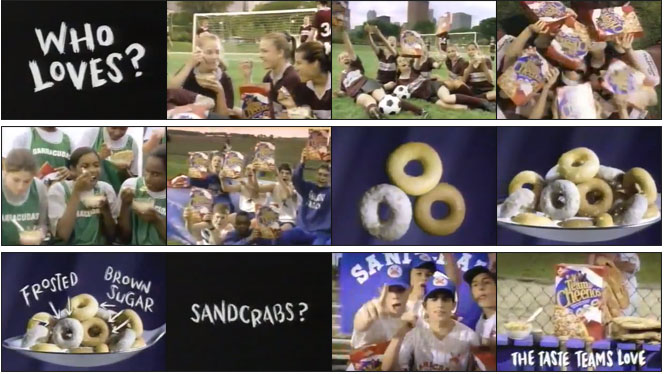 "Who loves Team Cheerios? The Sting Rays were stung by them. Down south, the Barracudas are chomping them down. The Sharks are in a frenzy for them. Teams all over gave Team Cheerios a tryout and they loved it, because it's three awesome O's teamed up and sweetened up with frosting and brown sugar for an amazing sweet crunch your team will love. Don't forget the mighty Sandcrabs. Yeah, they dug right in. Team Cheerios. The taste your team will love."

Now Showing: Commerical Block w/ Team Cheerios Ad
Upload an image for this cereal
Comments About This Cereal
What do you think of Team Cheerios?

I would stock up if they would put it out for the Winter Olympics now! I wish they would bring it back - it was the best!

I loved Team Cheerios! Please bring them back!

Team Cheerios was awesome! Just the right mixture of brown sugar and frosted sweetness in a whole grain cereal. The amateur high school teams featured on the back of the box were cool too. Teams were selected based on their on the field success AND their off the field good deeds in the community. A great example of companies promoting good while doing good business.

I want it back! Team Cheerios was awesome. Just enough sweetness for a good morning breakfast. I look for them every time I shop for groceries. Hope to see them soon.

These were my favorite too. I still look for them and still hope every Olympics that they might make a comeback.

Bring it back. The mixture of the regular Cheerios with the frosted ones was really tasty.

Come on... please bring them back!

Please... please... PLEASE bring this cereal back! I crave this stuff!

Even though I haven't seen it in stores in 15 years, I still check the cereal aisle every time I go shopping just in case they've decided to bring it back. Nothing will ever compare to the deliciousness of Team Cheerios!

The best cereal ever! Bring it back ASAP!