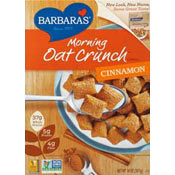 
This cereal was previously known as Cinnamon Shredded Oats. The cereal was renamed in 2013 and was given a fresh new packaging design. The company's official website described the renamed cereal like this: "Lightly toasted whole grain oat and wheat pillows dusted with cinnamon make an irresistibly crunchy breakfast or snack."

The cereal is available in 3 other varieties (as of this October 2013 writing): Original, Vanilla Almond and Mini Blueberry Burst.

Upload an image for this cereal
Comments About This Cereal
What do you think of Morning Oat Crunch - Cinnamon?
There are no comments yet for this cereal. Be the first! Was it good? Was it bad?
Do you have information not included in the article? Let the world know!