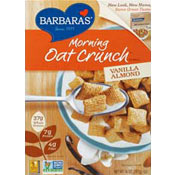 
This cereal was previously known as Vanilla Almond Shredded Oats. The name and packaging was changed in 2013. In 2013, Barbara's website described the revamped cereal like this: "Lightly Sweetened crunchy oat and wheat pillows mixed with ground almonds and a touch of natural vanilla flavor will brighten your breakfast table."

In the autumn of 2013, Morning Oat Crunch was available in 3 other varieties: Original, Cinnamon and Mini Blueberry Burst.

Upload an image for this cereal
Comments About This Cereal
What do you think of Morning Oat Crunch - Vanilla Almond?
There are no comments yet for this cereal. Be the first! Was it good? Was it bad?
Do you have information not included in the article? Let the world know!