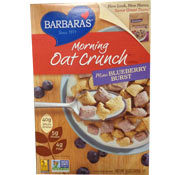 
According to the company's website: "(These) mini-sized pillows of crunchy, toasted oats, wheat and natural blueberry flavor are bursting with whole grain goodness, Vitamin C and natural antioxidants."

As of October 2013, there were three other varieties of Morning Oat Crunch cereal available: Original, Vanilla Almond and Cinnamon.

Upload an image for this cereal
Comments About This Cereal
What do you think of Morning Oat Crunch - Mini Blueberry Burst?
There are no comments yet for this cereal. Be the first! Was it good? Was it bad?
Do you have information not included in the article? Let the world know!