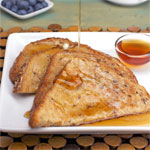 (1 serving)    Printable Version
I test a lot of French toast recipes with a lot of eggs. I was happily surprised how much I liked this egg-free version. Visually, it looks like French toast made with eggs. The cornstarch and sugar help create a light crust on the outside. Eaten without a topping, you may notice the missing egg. Once you slather on some butter and maple syrup, you probably won't miss the egg. If your diet necessitates an egg-free solution, I strongly recommend giving this dish a try. (This recipe was tested and photographed in August 2014.) 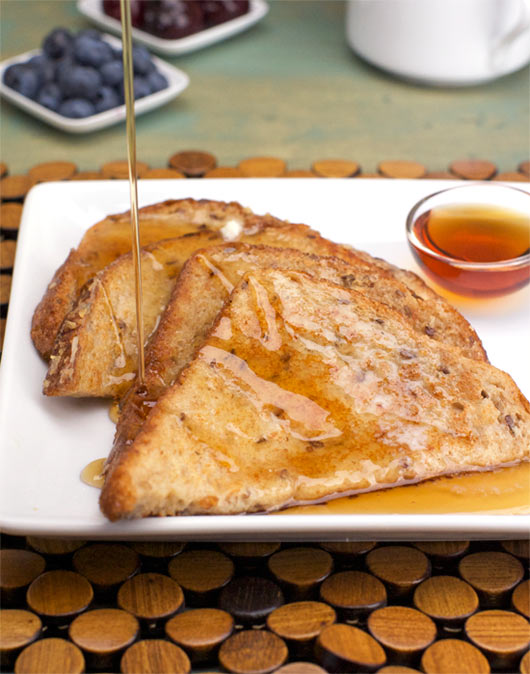 How To Make Egg-Free French Toast

Preheat a griddle or fry pan to just above medium heat.

In a medium bowl, combine all ingredients except bread and butter. Mix until the cornstarch is dissolved. Transfer mixture to a shallow bowl or pan.

Dip both sides of each bread slice into the mixture.

Melt butter on the griddle or skillet. Place bread on heated surface and cook each side to a light golden brown. 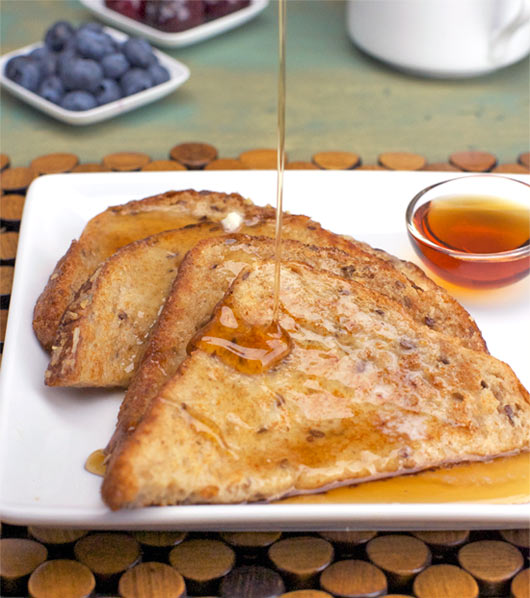 Note: Depending on the size and thickness of your bread, you may be able to make 1 or 2 more slices of French toast with the amount of milk mixture this makes.

You won't even miss the egg. It looks and tastes like regular French toast. Give it a try.


Comments About This Recipe
What do you think of Egg-Free French Toast?
Overall Average Rating = 4 (out of 5)
Based on 50 votes.

View all 55 comments for this recipe.

From Ruby
The recipe was great and clear, but unfortunately I think I did something wrong cause they didn't taste that good. Thank you though!

From Nelly
I am lacto vegetarian and never had eggs in my life but always wanted to try French toast, thank you! It tasted amazing.

From Jem
Worked brilliantly! I tried cooking in butter and with spray oil - both worked fine. Topped with maple syrup and strawberries!

From Meg
Didn't have eggs and kiddos were requesting French toast. Came across this recipe and gave it a try. Loved it! This is the best French toast! We didn't miss the eggs at all! I didn't have vanilla and I added cinnamon. It was a hit with my kids! Will definitely make it again!

From Erinmb
I developed an allergy to eggs and I have not had French toast in 15 years. This recipe is exactly how I remember French toast tasting! And now once a month on Sunday, my husband and I have a great French toast breakfast... Thank you! Excellent!

From Runner
I really suggest using cooking spray, because it will prevent it from sticking to the pan.

From Baby G.
Nice recipe! We all enjoyed it very much.

From EllePelle
This is extremely delicious! I added cinnamon. Didn't have cornstarch. Didn't need it. Still very good.

From im33justme
For someone who doesn't like eggs but loves French toast, this recipe is perfect! You have to move fast with dipping but it tastes awesome!

From Picky kids
We really liked this recipe! I dunked the first piece in the batter for too long. You have to work faster than an egg batter. We will make this again.

From Kay46
Tried twice and the second time I was careful to barely dip bread in to the mixture. It stuck to my heated, buttered skillet. Bummed because I told daughter I would make it. We were out of eggs and I thought this recipe would save me going to Kroger's. The problem was probably that my bread was too thick.

From Nick
My son has an egg allergy and never had French toast. He loved it!

I tried cooking this recipe TWICE on two different skillets but both times, the bread would crumble and burn my pan. I did not enjoy making these.

From Maddie
This was the best recipe for egg-free french toast!

From Shwoop
It's good, but every time I cook it the middles are kind of mushy. The outsides are perfectly fine. I don't soak it. I just dip it to coat both sides. Advice?

From Amber
Could not tell that eggs were missing. I had no cornstarch so I used flour instead (1:3 ratio). Thank you for this recipe!

Can I make it without cornstarch?

View all 55 comments for this recipe.